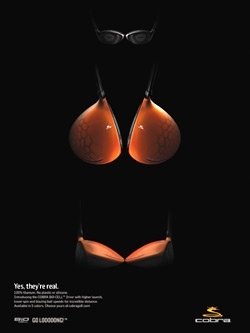 “VML is an innovative agency with extensive expertise in creating meaningful consumer experiences within the world of marketing, and we are excited to have them on board,” said Bob Philion, President, Cobra Puma Golf. “Their understanding of the industry and ability to tell our Game Enjoyment story across multiple platforms will help us elevate our communications platform and reach an even greater global audience.”

The Puma account represents a new direction for VML, which has previously been best known for its digital work. Indeed, partner agency Y&R often seeks its digital expertise on behalf of its clients. Still, digital-only work was limiting VML's potential, say executives.

"We decided on the behest of our CEO Jon Cook to start with the idea and focus less on how it comes to life," says Gard Gibson, Executive Director, VML. "You box yourself in when you deliver to specific mediums. It's not that we are stopping our digital work, but now, our focus is taking a great idea and bringing it to life."

VML's first creative collaboration for Cobra Puma Golf is a print ad in the annual swimsuit issue of Sports Illustrated. In the coming months, VML will introduce additional creative as part of the current Cobra "Go Loooooong" campaign that was originally developed by incumbent agency id29.

"The Sports Illustrated ad was really a one-off thing due to timing," says Gibson. "Looking forward, our first work will debut in the 2015 season. That's how it works in the golf world. We are doing it now, but it won't come out until then."

The wait will be worth it, say VML executives. The agency hopes to revitalize the golf category with its upcoming advertising initiatives. "One of the things that got us really excited about this account was that there's not a lot of focus on the individual golfer," says Gibson. "Most of the ads shout out that 'we hit the ball the longest" and there is not a lot of innovative work. Puma has a great stable of athletes that we hope to show and we want to appeal to the individual golfer, [whether he or she] is scratch or a beginner."