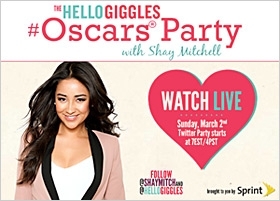 For many, a crucial component of watching the Academy Awards broadcast is to be able to keep a running commentary with like-minded friends and family about the event’s proceedings. But with the possibility of friends and family being scattered all over the country, getting together in person can be tough. Enter Sprint and its “Framily” plan.”

The wireless company has partnered with female-skewing Web site HelloGiggles and actress Shay Mitchell (“Pretty Little Liars”) for a live “Twitter party” for the event, bringing all participants into Mitchell’s honorary Framily.

“People who watch the Oscars want to be a part of the experience, and a Twitter party is a great way to do that,” Leah Gentry, director of social marketing for Sprint, tells Marketing Daily. “It’s a great way for people to feel a part of the red carpet.”

Throughout the broadcast, Mitchell (@ShayMitch) and HelloGiggles (@HelloGiggles) will offer running commentary (using #HGparty) about the Oscar telecast, dishing on the biggest moments and real-time challenges for prizes such as new smartphones, Gentry says.

The promotion, engineered by Team Sprint agency DigitasLBi, is modeled after a similar effort undertaken during this year’s Super Bowl, she says. In both cases, the Twitter parties are meant to demonstrate an understanding that the idea of the modern American family has changed to include the people you’re closest to, who are not always relatives, she says. The are also an acknowledgment that the best way to keep in contact with them is through social networking.

“In order to tell about [the Framily plans], we said, ‘What are really good live real-time events that people attend with Framily?’” Gentry says. “It’s a real recognition that the second screen is no longer a phenomenon. It’s ubiquitous.”