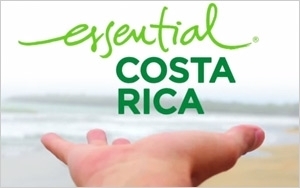 Costa Rica, the Central American nation almost universally known as a safe haven for eco-diversity, ecotourism, and adventure, is launching its first global campaign that talks about more than its vast array of Arcadian attractions.

The campaign, which also dispenses with "No Artificial Ingredients" for a more ecumenical "Essential Costa Rica," serves as an umbrella that covers tourism and aspects of the country most people may not associate with Tico life: high-tech programs, industry, and culture.

The new brand was introduced worldwide via prime-time commercial spots during the Olympic Games in Sochi. The new logo will appear on labels and tags on all of Costa Rica’s tourism-related marketing materials as well as many of Costa Rica’s top exports, per the organization.

The ICT has also launched an iOS app called goCostaRica. The app, via 22squared and developed by MaxMedia, delivers videos, photos and interactive maps about the country. Users can build a "Precation" video for social sharing, using assets within the app culled by a 10-person crew working 28 days to cover 33 locations. "The main thing is to expose people to the message that we love visitors and international investors; we are not a closed society," says Juan Carlos Borbon, general manager of the ICT. "This is one brand for the country."

He tells Marketing Daily about 60% of visitors to Costa Rica come from the U.S. and 20% from overseas, and a small percentage from South America. One big differentiator for the nation versus other tropical Meso American destinations is that it eschews self-contained resort experiences that feel sealed off from the host country. It also doesn’t have the sky-scraping hospitality behemoths that other Caribbean and Pacific spots have to attract all-inclusive seekers, who favor the Club Meds of the world.

"A lot of people prefer massive hotels and packages,” says Borbon. “We don't really have those. We prefer visitors who give us an opportunity where everyone can take a piece of the cake. While others prefer to concentrate people in one area, we prefer people to have the whole experience."

Melissa Tencio, a marketing executive with ICT, tells Marketing Daily that the bottom line with the new campaign is defining the essence of the country. "It's tourism but also the spirit and future of Costa Rica, and a lot of other things we can offer to the world. There are a lot of countries doing this, and we don't want to get left behind."

The country has run several U.S. and Canada campaigns, including one called “Costa Rica’s Million Dollar Gift of Happiness” in 2011 and 2012, dangling $1 million in week-long vacations to Costa Rica. Last year, Costa Rica launched a partnership with Royal Caribbean Cruise Lines in which Los Angeles, San Francisco, Boston and New York promoted travel packages that include three-night stays in Costa Rica with a city tour beginning Oct. 31 and running through December.

This year, several Central American countries have cooperatively developed a partnership with cruise lines for new routes through the Pacific, called Amazing Pacific. One starts in Costa Rica and heads up the Pacific Coast to L.A.