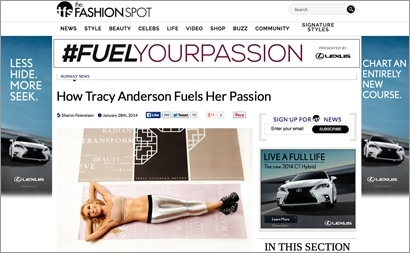 Over the past month, the campaign racked up nearly 6 million social impressions (5,995,312 to be exact), according to Geoff Schiller, Chief Revenue Officer of TotallyHer parent Evolve Media.

“This [was] defined as the fully realized reach for all content using the #fuelyourpassion and #lexusct hashtags,” Schiller said, referring to Lexus’s new 2014 CT Hybrid, and its tagline, “Fuel your passion.” That’s “basically the number if all followers saw the content posted (including retweets),” he clarified.

Throughout the month, the campaign averaged 60 new social content pieces per hour with a high of 1,800 per hour on February 7. A top five fashion property, according to comScore, theFashionSpot lavished Lexus with original editorial programming, and social “amplification” using what Schiller calls “social visualization.”

To max out share of voice for Lexus during the month, TheFashionSpot’s editorial staff came up with “on message” material like an interview with fitness guru Tracy Anderson.

The story, “How Tracy Anderson Fuels Her Passion,” runs alongside ads for the Lexus CT and its tagline, “Fuel your passion.” A clear cue for readers to share the message, one banner prominently features the quasi-call-to-action: “#fuelyourpassion.”

But don’t try describing the Anderson story as an “advertorial" to Schiller. “It’s a value-add for Lexus, but they had no oversight, so it’s not an advertorial.” If not executed properly, however, such executions do have the potential to turn off readers, brands, and featured personalities like Anderson.

“These are not campaigns that we’re going to churn out as a commodity,” Schiller said. “You can’t or else you lose control.”

Yet, by one definition, that’s doesn’t mean publishers can’t scale their native efforts.

“We’re working on scaling the few campaigns we do develop, and social plays a big part in that,” Schiller explained.
Going forward, he said similar efforts would be implemented across Evolve’s CraveOnline Media and TotallyHer Media publishing divisions.

More broadly, Schiller -- previously with Hearst Digital Media, where he served as chief sales officer -- is trying to improve the distribution and discovery of editorial and ad content across Evolve properties. To do so, he’s relying on Crowd Ignite -- a content exchange engine that Evolve bought in 2011 for a reported $1 million. Crowd Ignite’s technology contextually connects audiences of similar interests.

It was especially significant that Anmuth and his colleagues tied the success of native to mobile, considering that they expect ad dollars devoted to the channel to overtake desktop dollars this year.

Last year, eMarketer predicted that the native niche would hit $2.85 billion by 2014.