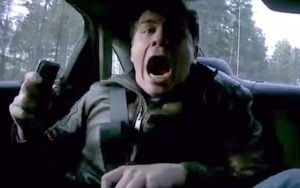 The challenge: How to top that kind of success.

The answer: In the just-released sequel, "Test Drive 2," Gordon again dons a disguise, this time to take on one critic's charges that the first test drive footage (cut down to 30 seconds for a TV spot) was faked.

For the sequel, Travis Okulski of car blog Jalopnik.com — one of the first video's most vocal doubters — was lured to Charlotte, N.C., on the pretext of an exclusive opportunity to watch the filming of an ad for the brand-new Corvette Z06.

The 4:50-long video shows Gordon, playing a cab driver (with a neck tattoo), picking up the unsuspecting blogger at a hotel.

When a "cop" attempts to pull him over, Gordon-as-cab-driver declares he's just gotten out of jail after 10 years and "can't go back," then takes off with the cop car in pursuit. Along the way, Gordon repeats many of the same types of extreme driving stunts he pulled in the first Pepsi Max test-drive video, as an indisputably terrified Okulski (shown in screen capture above) screams, kicks, bangs on the window and pleads with him to stop.

When Gordon finally does stop — at a warehouse where he reveals his identity to Okulski amid confetti, balloons and Pepsi Max signage — the racing legend asks the now-hugely relieved blogger: "Was that for real?" Okulski, who takes the prank with remarkably good humor, laughingly replies: "That was for real," and even expresses eagerness to go on another ride with Gordon.

The original test-drive video was created by TBWA/Chiat/Day/LA, and directed by Gifted Youth's Peter Atencio. The sequel is also directed by Atencio, but Omnicom's Davie Brown Entertainment devised this video's concept and handled the creative execution.

Will social lightning strike again? The first 'Test Drive,' which pulled 10 million views in a single day and nearly 30 million in its first week, is indeed a tough act to follow.

But the sequel's so far off to a strong start:  About 24 hours after its posting on YouTube, "Test Drive 2" had already pulled nearly 4 million views, and the number was rising quickly.

Pepsi Max is, of course, heavily promoting the sequel video on Twitter (currently showing 65,500 brand followers), with the hashtag #TestDrive2.

And once the video was published by Pepsi, Okulski (who was not paid by Pepsi for having been put through the prank or appearing in the video), posted a blog providing a blow-by-blow of his unforgettable experience.