He's not the richest billionaire on the list, but following WhatsApp's $19 billion sale to Facebook, Founder Jan Koum is rich enough to grace the cover of Forbes Magazine's annual issue. With an estimated net worth of $6.8 billion, Koum ranks 202nd overall (and somewhere between John Malone and Sumner Redstone on the media billionaires list). WhatsApp Co-Founder Brian Acton, with a net worth of $3 billion, ranked 551st.

That said, Forbes does include Amazon Founder Jeff Bezos on its media list -- No. 2, just behind Bloomberg and just ahead of Cox Enterprises’ Anne Cox Chambers. 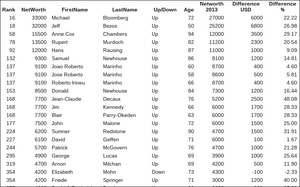