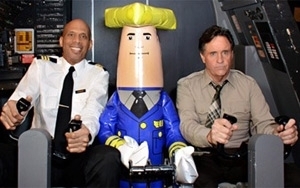 Surely, you want to travel to Wisconsin. "Hey," you might be thinking. "Don’t call me Shirley."

The Wisconsin Department of Tourism is hoping that linking the state to the satirical comedy classic “Airplane!” will help generate some travel consideration.

The first zany spot refers heavily to the 1980 movie, which was created by Jim Abrahams and brothers David and Jerry Zucker, all three Wisconsin natives, who also were involved in creating the tourism spots.

A series of spots, from Milwaukee-based Laughlin Constable, feature the stars of the movie, NBA legend Kareem Abdul-Jabbar and actor Robert Hays, who take viewers on a flyover tour of Wisconsin.

Abdul-Jabbar played for the Milwaukee Bucks and helped the Bucks win their first and only NBA championship. In the commercial, Abdul-Jabbar, when viewing the beauty of the state says, “I can’t believe I ever left this place,” a humorous reference to his departure from the Milwaukee Bucks to the Los Angeles Lakers in 1975.

The new summer, fall and winter spots premiered Monday at the Wisconsin Governor's Conference on Tourism.

The summer spot will run on local markets and in cinemas May 12 through July 24 throughout Wisconsin, Chicago, Twin Cities, and Cedar Rapids and from late-June to late-July in the Quad Cities. The ad will also air at Milwaukee Bucks games during the month of March.

Other summer campaign components include radio, out of home, print, social media and public relations. In addition, Otto Pilot will blog for Travel Wisconsin and make appearances at various events to provide user engagement with the campaign.

"Wisconsin is blessed to have so much to offer visitors," said Wisconsin Tourism Secretary Stephanie Klett at the conference. "We're so fortunate to have Wisconsin talent, a former Milwaukee Buck and NBA legend and a Hollywood star lend their talents to showcase the beauty of Wisconsin in a fun and memorable way."