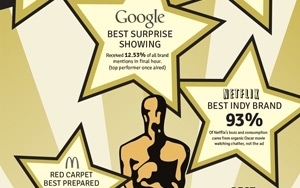 Samsung is reaping the benefits from Ellen DeGeneres' celebrity selfie during the Academy Awards. DeGeneres’ photo -- which included a bevy of stars such as Brad Pitt, Julia Roberts, Meryl Steep and Bradley Cooper, who actually took the shot with the host’s Samsung phone -- was uploaded to Twitter and the resulting viral picture has garnered more than 1.2 million retweets.

The actual tweet did not contain a Samsung mention, which happened to be one of the broadcast's official sponsors, but the phone and logo were shown during the taking of the photo. As a result, conversation around Samsung instantly multiplied 27 times over, with Samsung mentions topping 900 per minute during the staging of the shot, reports analytic agency Kontera.

Samsung also had high consumption and conversation peaks of more than 40,000 social mentions that primarily happened during its traditional commercials, per Kontera's tracking.

This year's show demonstrated a lot more earned media and tight interweaving with Oscars content, says Ammiel Kamon, EVP of Products and Marketing, Kontera. "Last year Grey Poupon was the only brand that truly evoked the Oscars spirit to see organic consumption peaks. This year multiple brands were able to evoke and capitalize on 'content marketing' in the sense of being in or close to the primary content 'stream.'"

Samsung wasn't the only brand to increase its social media presence during the event.  Kontera, which monitored online brand consumption and social mentions during the show, found that Pepsi, Lipton (with its Muppets-related spot), and Netflix were among the night's biggest winners. The results were determined by isolating Oscars-related consumption from a brand's typical consumption.

As evidence that brands don't necessarily need to advertise in the early part of the show in order to attract attention, Google's second commercial that aired during the latter part of the program received 12.5% of all brand mentions from that point forward -- peaking at around 800 tweets per minute, per the Kontera data.

However, Netflix's social media buzz did not come directly from advertising. Indeed, 93% of Netflix’s buzz and consumption during the Oscars came from viewer chatter and inquiry about watching Oscar movies and where to see nominees. This brand would have seen a spike during the Oscars even without spending on a TV commercial, reports Kontera.

Other brands that experienced a boost by the show include McDonald's and Oreo, which benefited from their presence during the Red Carpet parade.

"I believe that what was proven true, though, is that for making an impact and standing out brands needed to have a real content element that was discussion-worthy and connected emotionally [and] authentically," says Kontera's Kamon.

"Brands that only used a traditional strategy of repeatedly showing the same 'TV spots' did not do well by online consumption measures and buzzworthiness. They may have done well by traditional measures of, say, having the same ad seen five times, but they likely did not connect emotionally and they will not be receiving the day-after 'water cooler' consumption bump."

And there are strategies the brands could deploy to extend their Oscar buzz, said Kamon. For instance, he suggested Samsung could start a tongue-in-cheek “my posse” at Oscars' meme or competition. Or Lipton could do more conversational and agile marketing as the Muppets movie draws closer, since the initial association is already established.