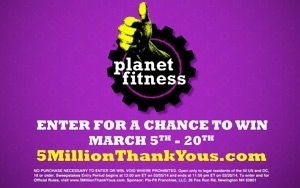 To celebrate its 5 millionth member, Planet Fitness is celebrating, kicking off a “5 Million Thank Yous” campaign and contest.

“As a brand, we feel we have hit an enormous milestone, that our five million members makes us the biggest in the industry,” Jamie Medeiros, VP/marketing, tells Marketing Daily. “We market to our members with messages that are inclusive, so we wanted to give them a personalized thank you.”

Members can enter their information into the Thank-O-Matic 5,000,000 and get a personalized thank-you video, and enter to win such prizes as a Mazda 5, a 5-day cruise, or $500 five times a day. It’s also supporting the effort with a special TV spot, this one mocking the fierceness of many gym classes with a hybridized monster known as Pilatatumba.

The effort is in keeping with the Newington, N.H.-based company’s ongoing “No Gymtimidation”  campaign. Comical “Lunk Alarms” (activated whenever someone breeches gym etiquette in some intimidating way) and its Judgment-Free Zones are intended to make the slackers among us feel safe and at home. “Most gym chains market to the 15% of population that are avid gym users, and we’re trying to reach the other 85%,” Medeiros says. The company’s core audience is between 25 and 45, with slightly more women.

Using that “gym for the rest of us” positioning, the company (which even occasionally offers members free pizza and bagels) had a banner year in 2013, opening 149 new Planet Fitness clubs in the U.S. and Puerto Rico and signing more than 200 new franchise agreements. With more than 750 locations in 47 states and Puerto Rico, it says it has tripled in size in the last five years.