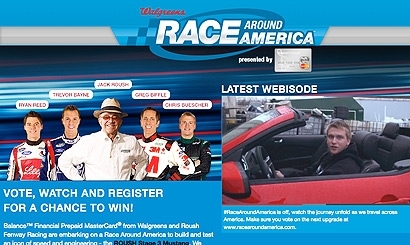 Walgreens is promoting its Balance Financial Card via a partnership with Roush Fenway Racing.

"The Race Around America" initiative focuses on the prepaid MasterCard with a multifaceted campaign culminating with the awarding of the grand prize: a trip to Miami to receive the Roush Stage 3 Mustang previously driven by Roush Fenway racers.

By registering their cards for the promotion, cardholders will be entered in the sweepstakes portion of the promotion. Card holders can earn additional automatic entries -- up to five times per day -- by making a purchase or reloading their Balance Financial Cards. The contest runs until Oct. 15.

Throughout the promotion, Roush Fenway Racing drivers Greg Biffle, Ryan Reed, Trevor Bayne and Chris Buescher will drive the Mustang from a concluding NASCAR race city to the next, making pit stops to meet with fans along the way. Webisodes from the drivers' journeys will be available to view online.

Fans can vote on the routes the drivers take and upgrades made to the Mustang. They can also use their Balance Financial Cards to help the drivers earn the upgrades fans vote on. A new Roush Performance upgrade will be installed on the car throughout the promotion, as long as the Roush-o-Meter gauge on the Web site redlines.

By using the hashtag #RaceAroundAmerica, liking the promotion Facebook or making purchases and reloads with their cards, consumers will be helping the drivers qualify for the next upgrade to the Mustang.

Fans have already dictated the Mustang's design to be used during the promotion through online voting, selecting a patriotic design scheme as the fan favorite.

The design represents an American iconic symbol, the American flag, in a nontraditional depiction. Smooth gradients starting at the sharp tip of the hood line of this great American muscle car give a look of momentum and speed.

"The eye-catching design reflects the patriotism for which NASCAR fans are well known, and we are proud that our Race Around America Mustang will sport red, white and blue -- so fitting for one of America's greatest auto brands," said John Schmidtke, manager, Walgreens loyalty marketing, in a release.