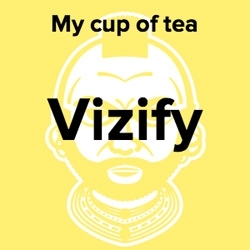 Launched in 2011, the company has developed a tool allowing consumers to create visualizations and infographics, based on their social media activity. That in turn would help users offer a more visual and unified online profile.

This looks like another Yahoo acqui-hire, however, with Vizify planning to shut down its platform as part of the deal. In a blog post today announcing its acquisition, Vizify said it would sunset its service and would be issuing refunds to paid users. Both free and paid users will be able to get a snapshot of their current graphical bio through September 2014.

“As for what’s next, we can’t talk specifics just yet, but we’re excited to bring a more visual approach to data at Yahoo. We have a lot more up our sleeves and can’t wait to get started,” stated the post. The company -- which had received about $1.5 million in funding to date, per TechCrunch -- began talking with Yahoo last summer.

“We have found in Vizify a company that shares our passion for visualization technology and the user experience,” Yahoo said in a statement issued Wednesday. The company added that Vizify’s five-person team has joined its media product organization in San Francisco.

Yahoo’s latest acquisition comes on the heels of it buying Wander, a start-up that makes a diary app, as it continues to bolster its mobile and social capabilities. The Web giant has already made seven acquisitions this year after making a total of nearly 30 in 2013. Most have been smaller strategic deals, with Tumblr being the notable exception, at $1.1 billion.

During Yahoo’s fourth-quarter conference call in January, CEO Marissa Mayer said the company this year “would continue to opportunistically look for talent acquisitions as we continue to grow, particularly our technical workforce and our mobile workforce, and we will also look for good strategic alignment.”