Travelocity is launching a contest Sunday that wil 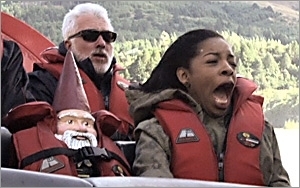 l give wannabe travelers a chance to win the trip of their dreams.

Seven new 15-second TV spots are supporting the effort, which breaks during the “Amazing Race.” The 15-second spots continue the tagline “Smell the Roses” and feature the hashtag #iWannaGo, which consumers are invited to use in order to enter the contest.

“It’s a way to celebrate the universal truth of wanderlust and to encourage travelers to share their travel dreams with others,” he says. “Whether it’s booking a quick trip to see family and friends or traveling to far-off lands and exotic destinations, we want to hear about it…we also want to help you get there. We want to know, where do you wanna go?”

A 45-second promo video shows the first winner of the contest, who tweeted “My next travel destination needs to be New Zealand.”  In the spot, the brand’s iconic roaming gnome interacts with consumers like never before. He shares in their travel adventures, such as zip lining, mountain climbing, horseback riding and white water rafting.

Four of the seven spots will air Sunday during the “Amazing Race.”  Developed with Durham-based advertising agency McKinney, the spots will air on major broadcast and cable networks including ABC, NBC, CBS and Fox, and exclusively on Travelocity’s own social media channels including Facebook, YouTube and Twitter.

This year, the online travel company and the gnome are making it their mission to help people do things they’ve never done, see the wonders they’ve never seen and cross those “I Wanna Go’s” off their lists once and for all. Travelocity is asking people to share their own “I wanna go” destinations with the gnome via the hashtag.

Consumers can enter the contest by posting a photo with their #iWannaGo destination on Instagram, or posting a picture or tweeting with the #iWannaGo hashtag on Twitter before May 5.

The company will pick two winners to go on the trip of a lifetime. The first will be announced in April and the second in May via social media.

Part of the inspiration behind Travelocity’s #iWannaGo contest stems from the thousands of everyday fans and followers who socially share their dreams of wanting to get away and see the world.

As part of #iWannaGo, Travelocity conducted a national survey to better understand and identify where, how and with whom most Americans prefer to travel.

A little more than a quarter (27%) of Americans prefer to stay on their home soil (U.S.) for travel and vacation; however, 25% of men want to travel to Australia.