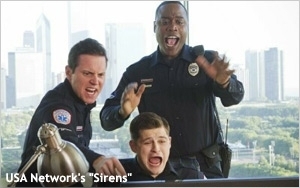 USA Network has recently been looking to stretch its identity a bit without compromising its reputation for engaging, easygoing entertainment on the order of “White Collar,” “Royal Pains,” “Covert Affairs,” “Psych” and the much-missed “Burn Notice.” That’s a foundation one doesn’t necessarily want to weaken, in that USA has long enjoyed its status as a top-rated basic cable network.

Still, given the huge ratings for and media obsession with the spectacularly violent “The Walking Dead” and the unapologetically adult “Mad Men” and “Breaking Bad” (all three on AMC) and any number of boundary-blasting dramas on FX -- especially “American Horror Story,” “Sons of Anarchy” and the suddenly supercharged “The Americans” -- USA lately has been made to feel a bit soft around the edges, if not outdated. It hasn’t helped that the network has been largely ignored (with only an occasional exception) by the Emmys and other awards franchises.

The network during the last two years has taken small steps toward AMC and FX territory, with flashes of nudity in “Covert Affairs” and “Necessary Roughness” and adult situations and language in “Suits” and “Graceland.” But overall, USA is still regarded as relatively edge-free. Once upon a time that was a good thing, but in the increasingly hard world of television entertainment, where everything must now shock or titillate if it is going to be honored with ongoing media attention and potential award recognition, edge is where it’s at. As every FX drama has illustrated at one time or another, there is seemingly no end to envelope pushing in original basic cable productions (beyond the f-word and the baring of genitalia) as long as the overall content maintains a certain level of quality and integrity. The rewards can be rich indeed.

Now USA wants some of that -- and it’s taking a big leap into such territory with “Sirens,” a half-hour comedy about Chicago EMTs filled with more adult content per episode than has ever been seen in the entire history of the network. Okay, I’m exaggerating a bit. But only a bit: “Sirens,” which premieres tonight, looks and sounds a lot like the late FX dramedy “Rescue Me” -- another relentlessly grown-up series, which should come as no surprise given that Denis Leary is a creator and executive producer of both shows. The only difference, at least in the first three episodes of “Sirens,” is that the intense drama that pulsed through “Rescue Me” has been replaced with funny and often outrageously silly scenarios in “Sirens.”

A scene in the first episode makes clear that “Sirens” is offering something we have never before seen on USA Network. In it, a dimwitted, well-endowed young cop stands naked in front of three male EMTs and four women who cannot stop commenting on his penis and testicles. The cop eventually leaves the room but later returns, still naked, generating still more exasperation and admiration from the gang.

In lesser hands, a scene like that one and many others in “Sirens” would be so stupid and unfunny that it would invite a quick channel change. But that isn’t the case here. Leary knows how to balance things between his characters, especially between the men and the women in his stories. In this instance the scene with the naked cop balances the many scenes and the constant talk about breasts. (The title of the episode is “Rachel McAdams Topless.”) Everything the characters do feels very real, which keeps this comedy consistently engaging even if it isn’t always laugh out loud funny. It helps tremendously that the largely unknown cast is uniformly appealing, even the recurring players.

One of the things I admired most about “Rescue Me” was its tendency to let scenes run long, especially those in which two characters (usually Leary’s firefighter Tommy Gavin and one of the women in his life) were trying to work through a conflict (usually without success). “Sirens” feels a bit like that. It allows scenes to play a little longer, the way they did in the old Norman Lear and MTM comedies. The comic energy ebbs and flows in the naturalistic manner of live theater. It’s a dramatic difference from most sitcoms today, especially those of the filmed variety, which are constructed primarily for the attention-challenged.

“Sirens” has the feel of a show that is only going to get better as it goes along. Assuming that happens, it should pave the way for more series like it on USA. If the network can produce successful comedies with this much edge one can only wonder where it might go with dramatic programming.