Mag Bag: Pope Francis Gets His Own Magazine 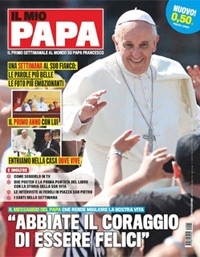 If boy bands can have fanzines, why not the Pope? This week saw the launch of a new weekly magazine in Italy, titled Il Mio Papa (My Pope), according to The New York Times, which first reported the news. The magazine will include photos, quotes and tidbits about the personal life of Pope Francis, who has captured the world’s attention with his modest personal style and plans to reform the Catholic Church.

The magazine is produced by Italian publishing house Mondadori, which also publishes more typical celebrity weeklies. The NYT quoted the magazine’s editor, Aldo Vitali, as saying: “It’s a sort of fanzine, but of course it can’t be like something you’d do for One Direction. We aim to be more respectful, more noble.” He added: “We don’t want gossip or paparazzi. We’re not going to go after any scoops.”

The magazine is unusual because unlike the Vatican newspaper, L’Osservatore Romano, it is not officially connected with the papacy, which makes the question of access to the titular subject a bit more complicated. It’s also unclear how much the magazine will cover any issues considered controversial within Catholicism, including the Pope’s decision to give women a greater role in the Church. As the NYT points out, there’s also a small issue of copyrights, as the Vatican owns all of the Pope’s writings.

Back in the U.S., the new owner of The Boston Globe, Boston business magnate John Henry, is planning to launch a new “Catholic news entity” led by journalist John Allen, a former Vatican correspondent for the National Catholic Reporter and currently an associate editor at the Boston Globe covering global Catholicism.

The Economist has launched a new digital feature, called “Essays,” devoted to long-form, single-column pieces that offer a more immersive experience, according to Journalism.co.uk. The first example, Democracy, explores the failings of modern democratic governments and how they might be rectified. The essay includes interactive maps that show, for example, the progress of democracy throughout the world over the last four decades, as well as video players embedded in the column. A small tile on the right side of the column indicates it is sponsored by Tufts University’s Fletcher School, with larger cross-page ads interspersed throughout the article. The Economist plans to publish eight Essays a year.

Tom Drouillard has been named CEO, president, and managing director of the Alliance for Audited Media, effective April 1. Drouillard previously served as president and CEO of Scarborough Research, as well as president of the Americas for Nielsen Online. He also held leadership positions at Claritas, PERQ/HCI, Interactive Market Systems, and SRDS. He will replace the AAM’s current president, Mike Lavery, who is set to retire at the end of March.

>
magazines
1 comment about "Mag Bag: Pope Francis Gets His Own Magazine".
Check to receive email when comments are posted.
Next story loading