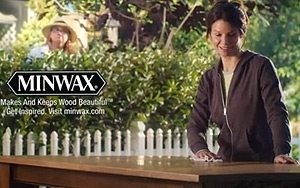 With America’s DIY drive back in full throttle, Minwax is introducing a TV campaign themed “We did that!” And it's meant to remind committed crafters of the pride that comes from a just-finished project as well as to nudge the next generation of consumers toward the woodworking aisle.

“Younger consumers may not yet have the need to take on a DIY project based on their life stage -- whether they own a house or not, married or not,” Julie Brock, senior product manager, tells Marketing Daily. But “Gen Y is on social media and sharing all they are doing -- it can be cooking and posting their recipes. So wood-finishing projects are a next step to what they are already doing.” Blogs and Pinterest are important sources of inspiration, she says.

The new campaign, from Brushfire Inc., is intended to help them jump from just thinking about a project to actually putting their sanding goggles on. It contains two 15-second spots, shot by Todd Bellanca of Lost Highway Films. One focuses on a man and the other on a woman, but in each, the main character can’t help showing off their handiwork to anyone who will listen. There’s also a short video, which it will use on social media, focusing on how a mother and daughter share that pride and accomplishment.

The campaign, which Brock says targets men and women equally, is built around TV. “Consumers watching DIY Network, HGTV and even Extreme Home Makeover gain education and knowledge, which builds confidence,” she says. In addition to running on late night on NBC and CBS and such cable networks as HGTV, DIY, ESPN, A&E and MLB, it also includes print, set to appear in Real Simple, Country Living, HGTV Magazine and This Old House.

Consumer interest is running high, thanks to the newly buoyant real estate market. Minwax parent Sherwin Williams, based in Cleveland, posted record sales in its most recent quarterly results. And the Home Depot just reported its best sales growth in 14 years.

Minwax, which claims an 85% share of the wood-finishing market, is a 110-year-old brand. “To continue to grow,” Brock says, “the brand must try to expand our market the beyond our current user base, by connecting with DIYers who may not have thought about trying wood finishing on their own.”