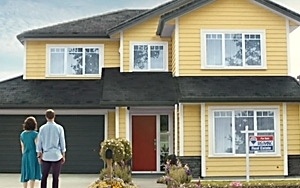 Anyone can dream their perfect home. But it takes someone with a particular set of skills to bring that dream to reality (or rein in those dreams to meet reality). In a new campaign, Re/Max positions its realtors as those people.

A new television commercial from Leo Burnett and its emerging-market specialist sister agency, Lapiz, creates a fairy tale environment that depicts people dreaming of their perfect home, only to point out some of the pitfalls that could be lurking behind those dreams. (A swimming pool, for instance, can cost thousands of dollars in upkeep and insurance.)

“Technology is reducing the role of the agent and giving people a false sense of knowledge,” Laurence Klinger, chief creative officer of Lapiz, tells Marketing Daily. “But to get to the best places in life, you need the kind of guidance only a human can provide. We looked at the competition, and nobody was saying that.”

The campaign, which launches next week, will also include a series of shorter, 15-second commercials depicting the specific scenarios a home buyer might face and how a Re/Max agent can help with them. The effort is intended to depict the specific set of skills and training specific to Re/Max agents in helping consumers.

“We decided to use the fact that Re/Max agents are better trained than any other, and transform this into a campaign where the Re/Max agent is portrayed as he really is: a knowledgeable guide,” Klinger says. “Re/Max was on the right track [with previous campaigns], highlighting the importance of their agents. But they weren't communicating well enough the fundamental truth that their agents are different and better trained to help home buyers navigate their quest for one of life's greatest achievements.”

Having begun its life as a minority-marketing specialist agency, Lapiz has turned its focus to “emerging markets and new behaviors,” Klinger says. That specialty gives the agency insights into reaching the post-recessionary home buyer, he says.

“The ghost of the recession is still wandering around, so the campaign is designed to give consumers the reassurance that with Re/Max they will buy the home they can afford, with the potential they expect, in the right neighborhood, and with the right features,” Klinger says.

The campaign will run through the 2014 calendar year on broadcast and cable networks. Print and radio components will break in April.