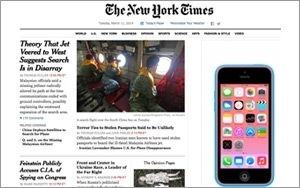 Apple’s online push behind the iPhone 5C has gone from Tumblr to The New York Times home page. A display ad dominating the upper right corner of the page features the same ad creative as the Tumblr page launched earlier this month to promote its mid-tier-priced handset, which has had disappointing sales so far.

Opening NYTimes.com initially sends a series of animated yellow dots scurrying from around the page into the ad unit, resolving to form the rear image of an iPhone 5C official case. The ad then presents a selection of six of the 17 15-second videos showcased on the iPhone 5C Tumblr page, highlighting its array of bright colors.

The playful videos, with titles like “Pump it up” “Showtime,” “99 Luftbaloon,” and “Pop,” each feature the animated dots in different configurations and colors paired with individual audio tracks or songs. While the Tumblr campaign has the tagline “Every story has its color,” the one in the NYTimes.com ad is more succinct: “Find your colors.”

The ads mark a more aggressive promotional effort online for a particular product than usual for Apple, which has generally favored TV and print over online advertising and shunned social media marketing.

Creating a presence on Tumblr for the iPhone 5C looks like a bid to reach millennials as a core market for the lower-priced model. It has been overshadowed by the flagship iPhone 5S since both were released in September. The company conceded in its fourth-quarter earnings call that it has seen lower-than expected sales of the 5C.

Separate eports have indicated the model been outsold 2-to-1 by the 5S.

“Both the [Times] ad and the Tumblr page suggest that Apple is experimenting to find an audience interested in the mid-range model, a challenge it previously hasn’t faced with iPhones, due to its annual focus on marketing only one flagship device,” said Jeremy Horwitz, editor in chief of iLounge, a site tracking Apple products.

If that’s the case, don’t be surprised to see iPhone 5C ads pop up elsewhere online. Clicking on the bottom of the Times ad takes users to the Apple Store page, but also features a Sprint logo. A Times spokesperson confirmed that the buy was made by Apple, but the ad includes a “retail option” with Sprint.

“I suspect that Apple has cooperative advertising agreements in place with carrier partners and may be contractually obliged or otherwise incentivized to co-promote a given brand under certain circumstances,” said Horwitz. He noted that Sprint signed an agreement with Apple in 2011 to sell 30 million iPhones over four years.

The custom format Apple ran on NYTimescom is called a "queen unit,” described as “a modified home-page template augmented by a transparent overlay to depict a rich brand experience.” The Times spokesperson declined to say if, or when, the iPhone 5C ad on the home page would run beyond Tuesday.