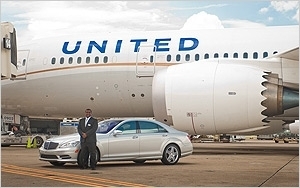 United Airlines is expanding its relationship with Mercedes-Benz.

The airline will expand its tarmac service to San Francisco this spring, offering members of the airline's invitation-only Global Services program comfort and convenience throughout their travel experience.

"With the tarmac transfer service, our investments in the new Boarding Area E in Terminal 3 and new terminal facilities to come, we are strengthening San Francisco as the region's premier hub and the nation's best trans-Pacific gateway," Samartzis said in a release.

United is making several flyer-friendly investments in San Francisco International Airport in 2014, including the ultra-modern Boarding Area E in Terminal 3 that opened to United customers in January. Later this year in Terminal 3, the airline plans to open a Global Services check-in lobby, similar to its Global Services lobbies in Chicago and New York/Newark, as well as a new check-in area for MileagePlus Premier customers.