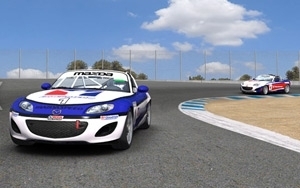 Mazda has a solid reputation in racing, particularly with its MX-5 Miata sports car and its Mazdaspeed performance sub-brand. And it has one of the biggest pools of club-racers of any brand. Now it's going to its Miata fanatics to find a few good men or women.

The automaker, which peels out under the Mazda Motorsports banner and has its name on the Mazda Raceway Laguna Seca, has launched a driver-development program, but initially on virtual asphalt. Through a partnership with Fenway Group's iRacing, which makes racing simulators that are used both by race gamers and racers in training, Mazda is reaching out to some 50,000 iRacing players around the world, including the 9,000 or so Mazda Motorsports club racers in the U.S.

By competing in the virtual Mazda MX-5 in the iRacing game, players vie for a chance to race an actual Mazda MX-5 Cup car next year with Mazda Motorsports. The company, which right now is competing at the Twelve Hours of Sebring, says iRacing competitors competing in the 2014 iRacing MX-5 Cup season beginning April 29 are eligible to compete in the annual Mazda Club Racing Shootout, in real cars, held each fall. The winner of the shootout gets a Mazda Motorsports scholarship for the following year’s Mazda MX-5 Cup Presented by BFGoodrich Tires.

John Doonan, director of Motorsports for Mazda North American Operations, tells Marketing Daily that the program is a win for the automaker from a marketing perspective. "Mazda's racing program has always been taking grassroots racing and making a business out of it," he says. "So annually we have about 9,000 amateur sports car racers and we sell something like $8 to $10  million in parts."

He adds that these customers, while they enjoy sports car racing as a hobby, have also become massive brand advocates. "When people are in the process of purchase consideration we think they, as very enthusiastic customers, are the go-to group for consumers who may be not as educated about our products."

Tony Gardner, president of iRacing.com, said that more MX-5s are sim-raced on iRacing than any other car. Mazda says it is also the number-one brand for road-racers across North America, and the Spec Miata is the world’s largest spec class with over 2,500 cars built.