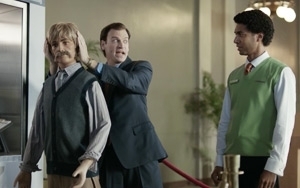 Huntington Bank is launching a multifaceted campaign that takes on its competitors' non-customer friendly attitude.

The effort, from Arnold Worldwide, breaks March 17 with five TV spots and online video. Radio and social will extend the campaign platform into April.

Also set to roll out is an interactive Web site called the "Bank Compatibility Test" where consumers can see for themselves if Huntington is a good fit.

Creative aims to show how the bank believes that profitability and customer-centricity can coexist. It highlights products like an overdraft protection policy that includes a 24-hour grace period and free checking accounts that are actually free.

TV spots are set in a fictional training ground called the Hall of Banking where an evaluation is in process. They explore how a Huntington banker and a competitor would each handle specific customer-related challenges.

The comedy comes from the juxtaposition of what we've come to accept as normal banking practices and the different way that Huntington does business.

The campaign is aimed at consumers who are tired of banking as usual and are looking for an alternative.

Huntington has been a challenger brand within the retail banking category ever since the 2008-2010 economic downturn, when it observed a number of banks making what it considered “unfair moves” against the customer, says David Clifton, Huntington Bank chief customer and marketing officer.

Things like inventing monthly maintenance fees for customers who don’t maintain a minimum balance, or hitting them with punitive overdraft fees without a grace period became normal practice at other banks, he says.

“At a time when the country was struggling economically, this didn’t seem right,” Clifton tells Marketing Daily. “So Huntington countered the industry’s ‘new normal’ with products like asterisk-free checking, and services like 24-hour grace, and we’ve stayed that course for the last four years. It’s a philosophy that we’re continuously looking to build on in order to make banking better.”

The bank has maintained a steady TV presence since 2010, but this new campaign reflects a shift in tone, Clifton says.

“We’re using humor to challenge the consumer’s complacency with their own banking relationship -- mainly because we've seen customer satisfaction levels return to pre-crisis norms, indicating that the bad behavior of banks has come to be accepted by the consumer,” he says. “We want to force them to ask the question: Am I in the right banking relationship? Is there a better alternative out there? Obviously, we think the answer is yes.”