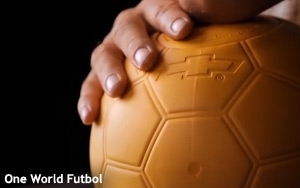 Chevrolet, which has a mammoth multi-year major-sponsor investment in soccer icon Manchester United, is taking the relationship to social media with a cause. During the Premier League mat,ch between Manchester United and Liverpool FC this past weekend the General Motors unit launched “What Do You #PlayFor?” with fans’ responses to that question getting funneled to www.chevroletfc.com.

The effort is less about social media than soccer as a social change agent: the program spotlights Chevrolet’s and the Red Devils’ involvement in a global program to make it easier for underprivileged kids and kids in unimaginable (to us) situations to play the game. Chevrolet, in a release, said the program is emblematic of how it is ramping up marketing programs this year with Manny U. This would be the year to do the ramp-up: in July the team will unveil its new jerseys, which for the first time boast the Chevrolet logo. The automaker promises an experiential activation around that event, as well.

The cause partnership Chevrolet and Manchester United are spotlighting involves One World Futbol Project, a four-year-old organization of which Chevrolet is founding partner. The project is best known for the One World Futbol, designed to be indestructible and un-deflatable, and whose development was funded by Sting. As part of its involvement Chevrolet says it has given away some 1.5 million of the balls to refugee camps, war-torn blood-lands, disaster areas, and underprivileged communities. The organization says it has distributed the balls to 160 countries.

“From the beginning of our partnership nearly two years ago, Chevrolet has followed through on its pledge of bringing fans closer to our Club and using football to do good around the world,” said Richard Arnold, Manchester United group managing director, in a statement. He said the campaign will drive buzz among the Old Trafford team's 659 million followers worldwide and "Create meaningful change around the world."

As part of the cause program, Chevy and Manchester United will send the team's top current and former players to developing countries to work with kids and coaches. The automaker says it is doing so now in Bandung, Indonesia, where it is also rebuilding the town’s soccer pitch on behalf of a local organization for people with HIV/AIDS and people who use drugs. Chevrolet is also talking about the work online with videos on the program at a co-branded microsite.

Chevrolet signed the partnership with the Red Devils in 2012 as part of then-CMO Joel Ewanick's strategy of establishing the auto brand worldwide in advance of a global-product offensive. It was a huge deal that runs through 2021 and — as of this season — puts the golden bow-tie on team shirts where AON's name used to be. The team gets a reported $70 million this year for putting the automaker's logo on its jerseys for the 2013-2014 season, with a 2.1% raise each year until the final year of the deal.

In 2013 Chevrolet brought the soccer focus to the U.S., where the game is growing in popularity both because of the growing Hispanic population and because of groups like AYSO (American Youth Soccer). Chevy signed a three-year deal to be Official Partner of U.S. Soccer, the game's governing body in the U.S. overseeing the U.S. National Men’s and Women’s Teams, Men’s and Women’s Olympic teams, Youth National, and the Development Academy.