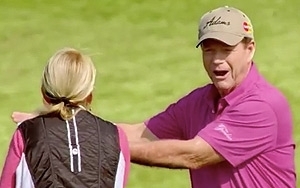 MasterCard has added a new extension of theme to its 17-year-old "Priceless" campaign -- taking the original message about the value of life's ineffable moments into creative and promotional ideas that include famous people, athletes, and regular folks.

In its latest effort, "Priceless Surprises," which launched during the Grammys, MasterCard is going to social media to give cardholders bucket-list worthy surprises tied to the company’s partnerships with sports and music properties and relationships with athletes and entertainers.

The newest component through its partnership with the  PGA Tour -- now in its 11th year -- brings in top golfers Tom Watson and Brandt Snedeker (winner of the 2012 FedEx Cup), and features TV ads, digital assets including video and promotional elements, social media, and promotional exclusives to fans and loyalists. The latter is core to the whole effort. The company is launching the campaign during the “Arnold Palmer Invitational presented by MasterCard” in Orlando this Thursday with TV ads featuring Watson and Snedeker.

In the spots, the golfers surprise cardholders who are getting tips from a golf pro on MasterCard's dime. But the real surprise is that golf legends show up unannounced and take over the lesson. In one of the ads, airing March 19 on the Golf Channel, golfers are taking practice shots with a pro when a cart pulls right up blocking their shots. Out jumps Tom Watson, who dares them to nail the cart. Then he's the one who gives them the lesson.

Also, MasterCard cardholders attending the game will have exclusive access to the MasterCard Club and Concierge on-site at the event.

For the ads, the company set up “Candid Camera”-type ad shoots by telling participants that their sessions were being filmed for their own training benefit, per Raja Rajamannar, who became CMO of MasterCard last fall. He tells Marketing Daily that the campaign began with the Grammys with programs involving Justin Timberlake and Beyonce and dangling everything from digital downloads of music, to concert tickets, to meet-and-greets with the the artists all the way up to Timberlake showing up at a cardholder's house and hanging out with (in this case) her, for the day.

"We had huge audience engagement for that,” he says, adding that social media has kept it growing. “It wasn't 'one and done.'" The campaign boosted MasterCard's share of voice on social media by 66%, Rajamannar says. The company did a similar program as part of its sponsorship of the Brit Awards, through a collaboration with Pharrell Williams and Kylie Minogue.

"It's not just about the category, it's how to engage consumers' attention and attraction. That's where ‘Priceless Surprises’ makes a huge difference for us. It's been two months since launch with Justin, and it's still going full steam."  He says the company has given away over 20,000 surprises to date.

The effort is being executed by an IPG agency conglomerate, McCann XBC with Dentsu's Carat in the U.S. handling media.