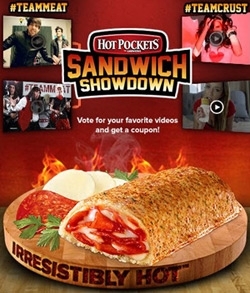 Hot Pockets is pitting popular YouTube channel personalities against one another in a bracket-style music video competition, timed to capitalize on the bracket fever surrounding college basketball's March Madness.

The premise: Two teams of personalities are facing off with music videos that take two different views on "what makes Hot Pockets so good." One side's videos argue that it's the sandwiches' "premium meats"; the other that it's their "freshly baked crusts."

Fans' votes on a Facebook page, www.HotPockets.com/SandwichShowdown, will determine the winners. Voters receive a coupon for the product.

Hot Pockets worked with Defy Media, which owns and operates brands on the Web and YouTube, including Smosh and The Wrap Zone, to develop and implement the competition. >

The partnership was a natural one, given that Hot Pockets' core Millennial customers are passionate about music and college sports, and look to YouTube as a primary source of entertainment and information, according to the brand.

The competition is being supported by co-branded marketing media on demographically targeted sites across the Defy Media Network and YouTube pre-rolls. Hot Pockets is promoting it on its social assets, including Facebook, Twitter and YouTube (where fans can watch a humorous teaser video), and the four YouTube personalities are promoting it on their own social networks.