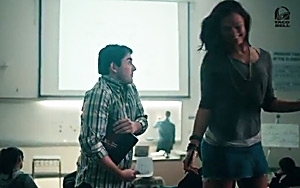 To drive awareness of its "Happier Hour," which runs from 2 to 5 pm each day, Taco Bell is running new TV creative that's slightly naughty, in a playful way.

The spot (in 30- and 15-second versions), from Deutsch LA, shows three different scenarios in which male/female pairs -- office colleagues, college students and seniors -- exchange suggestive looks and then appear to be heading out together for a tryst, as the song "Afternoon Delight" plays in the background.

But it turns out that they're all actually headed to a Taco Bell, where they can get any "Loaded Griller" for $1, and any medium beverage for the same price, during those three afternoon hours.

The "Afternoon Delight" version is a Little Hurricane cover of the 1976 Starland Vocal Band song.

The keen-eyed viewer may notice a cameo by "America's Next Top Model" winner Laura Ellen James, playing a college student who clearly makes the day of her much-shorter classmate when she lures him out of an in-progress lecture (shown above).

The spot began airing this week on networks and cable, and will continue running through the end of June, with additional media support through the end of August. Happier Hour is being promoted on Taco Bell's social assets, including Facebook (10 million "likes") and Twitter (1.1 million followers), as well as featured on YouTube.

Happier Hour is described in consumer promotions as a "limited time offer," but it's been running at participating locations since last year (an "always on" promotion), according to Deutsch. The current marketing push is the second campaign for Happier Hour; Taco Bell also ran a campaign last year.

The reasons behind a special afternoon event/offer aren't hard to grasp. QSRs obviously benefit from driving more traffic during the quieter hours between and following regular meals. And offering snackable items at attractive prices has become a key strategy for driving such business.

Among those who buy snacks at restaurants, 45% order from the value or dollar menu.

And while candy is still the dominant snack (purchased at least occasionally by 71% of surveyed consumers), half of consumers say that "healthfulness" is very important to them when choosing a snack. As a result, many restaurants, like their CPG counterparts, are including healthier options within their snack offerings.