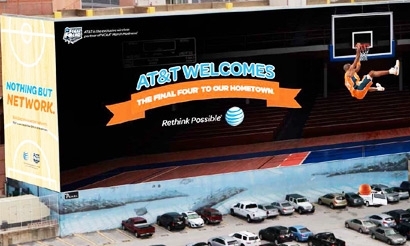 AT&T is taking advantage of its status as an NCAA partner (and the fact that the Final Four will be played in its Dallas hometown) to pull out all the stops to tout the improvements -- big and small -- it’s making to its network.

“Sometimes things align,” Vance Overbey, assistant vice president of advertising for AT&T, tells Marketing Daily. “We felt this was an important media property for us to launch this campaign.”

The push began during the basketball tournament selection special with a new television campaign that touts not cell towers, but the internal infrastructures (like in-stadium boosters and small cells in office buildings) that AT&T creates for a better experience. The campaign is humanized through two network specialists who are constantly working to improve the consumers’ experience. In the first commercial, the specialists are finishing their work in a stadium where a concert is about to take place. An attendee approaches them, asking what’s going on. “We’re double-checking the distributed antenna system, so when all you fans post to Instagram, there’ll be more network to handle it,” replies one of the techs. The attendee then asks if the company is hiring, to which the tech responds with a deal-breaking, highly technical question.

The better network theme is being extended to digital and print advertising that uses the NCAA basketball tournament to reinforce its message. In Dallas, where the Final Four is taking place at AT&T stadium (which the company believes is the first time the games have happened at an NCAA sponsor’s named venue) outdoor boards and installations are going up using lines such as “Nothing but Network” and “Experience buzzers as they’re beaten.”

“We think this is a fun way to leverage the passion [fans have] in this tournament, and connect us to it in an organic way,” Overbey says.

AT&T traces its connections to the NCAA basketball tournament to its Cingular Wireless days, when the company used the event to launch its new brand, Overbey says. It has been an integral part of the event since, because of the attention and passion that goes along with it, he says.

“We believe live sports is a very effective way to talk to an audience,” he says. “More than that we’re wanting to align with events and properties that fans have a passion for.”