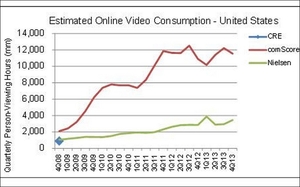 In an advertising marketplace disparity that likely has not been seen since Arbitron and Nielsen competed as currencies for local TV advertising buys decades ago, an influential Wall Street analyst released a report this morning suggesting the gap is far worse for the burgeoning online video advertising business. The analysis released this morning by Pivotal Research Group's Brian Wieser shows audience estimates produced by comScore, the current Madison Avenue standard, to be about three times higher than those being produced by challenger Nielsen.

“In our view, these buyers tend to rely on comScore in large part because its products are perceived to measure online audience share more accurately, and share is critical in determining which publishers should be included on an RFP (request for proposal) associated with a media buy,” Wieser writes in the report sent to investors early this morning, adding:  “However, methodological differences between comScore and Nielsen may become more important as online advertising becomes increasingly important to the large brands who care most about video-related advertising.”

Specifically, Wieser argues that Nielsen's legacy as the TV advertising standard will ultimately give it greater leverage as advertisers and agencies move to integrate the way they plan and buy TV and video advertising. He also cites Facebook's announcement last week to officially roll out video ads as an impetus for the shift, noting that Facebook plans to provide Nielsen's data to media buyers as the basis of its audience estimates.

Wieser, an equity researcher who follows Nielsen's stock, has long held the view that Nielsen would likely emerge as the video standard despite comScore's current dominance, and has previously cited similar deals with big video players, including Google's decision to begin tagging YouTube videos with Nielsen's tags. But the new analysis, which reviews five years worth of data, demonstrates exactly how wide the margin between the two researchers has been.

While the companies estimates are somewhat apples-to-oranges, utilizing different methods "(comScore always included ‘progressive downloads’ as well as streams vs. Nielsen which only includes streams)" and neither currently tracks all video consumption “(comScore does not include mobile devices, whereas Nielsen does not yet include tablets),” Wieser implies Nielsen's approach is more valid, noting, “the trends implied by comScore always seemed unlikely to us.”

In fact, he implies it is grossly overstated. Based on an analysis of data for the fourth quarter of 2013, Wieser says comScore's data implies online video currently has “the equivalent of 8.6% of TV viewing” of the average American, or nearly 15% for those who actively watch online video.

“By contrast, Nielsen's data suggests a figure of more like 2.6% share of time across the whole population and 4.9% across those who watch any online video,” Wieser explains, adding that based on his analysis of five years worth of data, “the difference between the two sources has ranged between 2x and 5x, a significant gap.”