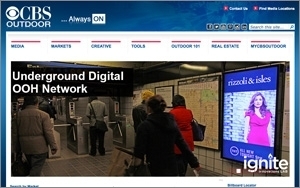 CBS Corp.’s planned spinoff of CBS Outdoor as a publicly traded company will raise as much as $560 million in the initial public offering, according to a financial statement filed this week.

CBS plans to sell 20 million shares in CBS Outdoor, in a price range between $26 and $28 per share. As part of the spinoff CBS Corp. will retain the majority of stock in CBS Outdoor after it is a publicly traded company, with 83% of shares remaining with the corporate parent.

Funds raised in the IPO will be used to finance CBS Outdoor’s conversion into a real estate investment trust, a corporate structure that should allow the company to avoid most federal income tax, as long as it pays out 90% or more of its earnings in the form of dividends to shareholders.

In the filing, CBS Outdoor revealed that it will pay shareholders a dividend of $0.37 per share per quarter after the REIT conversion.

CBS has been preparing for the spinoff of its outdoor division for at least a year. In July of last year, CBS Outdoor sold off its international division, including all its overseas properties except the Americas, to Platinum Equity for $225 million. Platinum beat out competing offers from Providence Equity Partners and GMT Communications Partners. Clear Channel Outdoor and JCDecaux previously dropped bids for the international division in April, partly due to regulatory concerns in Europe.

In January of this year, CBS Outdoor revealed plans to raise $800 million through an offering of senior unsecured bonds in a private placement available to institutional buyers, plus another $800 million through a term loan entered into by two of its subsidiaries. Private placement allows companies to raise money while avoiding certain regulatory issues.

Most of the proceeds of the $1.6 billion raised will be paid to CBS Corp. as part of the spinoff deal, with the rest used for CBS Outdoor’s own operations. Citigroup, Deutsche Bank and Wells Fargo are in charge of the debt financing