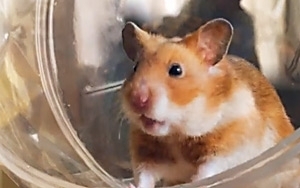 Still having trouble figuring out your framily? @Sprint introduces blended-family Frobinson (with hamster dad) to sort it out.

Sprint is attempting to humanize (and hamsterize) its “Framily” shared data plans with a new campaign that introduced a decidedly mixed American family.

The new campaign, created by Figliulo&Partners (in partnership with Sprint agencies Digitas/LBI and MediaVest), introduces the “Frobinsons,” a family that includes a hamster dad, a human mom, an African-American grandfather, a Latin aunt, a French-speaking towheaded sister (who’s constantly surrounded by animated birds), a southern-accented teen son, a college-age son and his college roommate “Gor-Don.” Television commercials introducing the Frobinsons will break this week, and other elements of the story will unfold in episodic elements over the coming months.

“The new creative demonstrates Sprint’s understanding of the diversity of today’s families as connected groups of individuals, as well as the New American Framily’s need to stay connected to the things and people they care about most,” Mark Figliulo, CEO and founder of Figliulo&Partners, tells Marketing Daily. “The Frobinson Framily is a quirky group of individuals who are still relatable to the American consumer, and the campaign helps to emphasize the importance of ‘Framily’ in an effective and entertaining way.”

In one of the new television commercials introducing the family, the hamster father is complaining at the breakfast table about the term, “Framily.” “Framily is not a word,” the hamster, voiced by Andrew Dice Clay, says. Others try to sway him by pointing out other combined words that have entered the vernacular, like “spork,” “keytar” and “brunch.” “Daddy does love brunch,” the hamster/father admits. The campaign introduces the tagline, “Happy Connecting.”

In the episodic stories, which will address developments in the mobile-industry as they arise, there will also be cameos from celebrities from sports, music and stage and screen, thanks to Sprint’s ties in the sporting and entertainment world. (Sprint is a sponsor of NASCAR and the NBA.)

The new Frobinson work will replace Sprint’s earlier efforts that introduced the line- and data-sharing plans (but were billed separately). Those commercials featured people standing in front of a photographers paper roll, as they created their “Framilies.” That work will not be returning, says Sprint chief marketing officer Jeff Hallock, though he stresses “the strategy is exactly the same.”

“The new campaign is much more comprehensive and will tell stories within stories, focusing on each character,” Hallock tells Marketing Daily. “Both campaigns hone in on the fact that families today are multi-generational, multi-ethnic, extended, geographically dispersed — and thanks to wireless technology — more connected than ever.”

In addition to television commercials, Sprint will be rolling out “Frobinson”-themed print and out-of-home executions. The company has also created a dedicated page on its website to the Frobinsons, who will also have their own personal Twitter accounts. “We encourage people to come back and visit the site to see what happens next,” Hallock says.