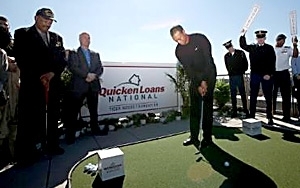 Quicken Loans has signed a multi-year agreement to become the title sponsor of a PGA Tour tournament.

The deal was announced in coordination with the PGA Tour and tournament host organization Tiger Woods Foundation.

The Quicken Loans National will be held June 23-29 at Congressional Country Club in Bethesda, Md. The tournament, now in its eighth year and one of the premier sporting events in the Washington D.C. area, welcomes more than 150,000 fans to witness 120 of the world's best golfers compete for a $6.5 million purse.

In addition to the title sponsorship, Quicken Loans will join the PGA Tour’s official marketing partner program and receive the exclusive designation as "Official Mortgage Sponsor of the PGA TOUR and Champions Tour."

Quicken Loans has a tradition of honoring and supporting military personnel. The company hopes to continue that tradition in conjunction with the PGA Tour and Tiger Woods Foundation, says Quicken Loans CEO Bill Emerson.

To kick off the sponsorship, three D.C.-area military families participated in a putting challenge alongside Tiger Woods and Emerson. The families won a total of $4,800 towards their mortgage payments from Quicken Loans. In addition to the winnings, Quicken Loans also donated a total of $30,000 to the Tiger Woods Foundation, Troops First Foundation, and Iraq and Afghanistan Veterans of America.

The Quicken Loans National will continue to raise funds and awareness for the college-access programs of the Tiger Woods Foundation. Currently, the foundation operates three Tiger Woods Learning Centers in Washington and the nearby Marine Corps Base, Quantico.

This is not Quicken Loans’ first foray into sports marketing. The company recently with Yahoo Sports as the technology provider for the now named “Quicken Loans Billion Dollar Bracket Challenge with Yahoo Sports” contest. Yahoo Sports designed the online bracket experience and is hosting the exclusive destination for the challenge.