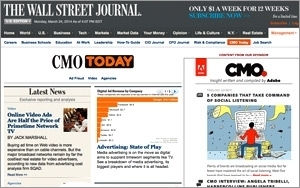 Don’t call it native, but Adobe is committing significant resources to establish an ongoing editorial-like presence on WSJ.com.

In exchange for what Fellows called a “significant investment” by Adobe, he added: “We’re allowing our sponsor to place highly relevant content [on WSJ.com].”

“But there is absolutely no blurring of the line between editorial and advertising,” Fellows made clear. “We’re unequivocally opposed to that.”

Native advertising, however, has only recently become a big priority for the publisher -- a push that comes amid increasing discussion over media’s willingness to cede control of editorial to advertisers.

Still, for The Wall Street Journal, “there is a high degree of reputational risk,” said Ryan Skinner, an analyst at Forrester Research. “If they screw this up, they lose audience, which creates a cascade of bad things.” For Adobe, “there is primarily financial risk,” he added. “If they screw this up, they waste money. The success of the endeavor will [come] down to whether these investments look or feel good from the perspective of the readers, who will vote with their clicks, shares and time,” Skinner added.

Yet, like many skeptics, Fellows doesn’t think native can scale. “It depends on your definition of native, but to do native right, you need sponsors that have stories to tell, and who are willing to make significant content investments,” Fellows said. “That, and the more [native partnerships] you do, the less special they become.”

Industry thought leaders have implored publishers and brands to rethink their rapid embrace of native partnerships.

“Publishers should say no, more than yes, to native,” Steve Rubel, executive vice president of global strategy and insights at Edelman, told attendees an the OMMA Native conference in November. “As an industry, we’re going way too fast.”

Taking an investigative approach to the business of marketing, CMO Today has a full-time staff of five reporters. As WSJ’s newly named advertising editor, Suzanne Vranica is running the show.

Adobe was not available to comment for this story by press time.