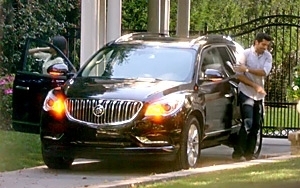 If my 20-year-old cousin (okay, okay, "nephew") saw a current-year Buick, he would very likely say "Um, that's what?" Not such a bad position to be in, considering he could have said "Oh, that's Grampa's car."

Buick probably doesn’t have to worry too much these days about the latter statement, but it does need to build brand awareness among a new generation and talk about the Verano, Encore, Enclave, Regal, Lacrosse, and, soon, the resurrection of Buick's performance cars, the Grand National and GNX. The General Motors brand is launching a new campaign to achieve that. It plays on the awareness gap with self-deprecating humor around the fact that a lot of people wouldn't know a Buick if it rolled over their foot.

The campaign, via AOR Leo Burnett, launches Thursday during the NCAA Dayton Flyers vs. Stanford Cardinal game with a 30-second spot. The ad comprises short moments in which people can't see the Buick right in front of them because they don't know it's a Buick. In one vignette, a woman is outside a club gazing down the street looking for her friend who points out, via cell phone, that she is parked right there in a Buick (Encore). "Where? I don't see a Buick." Another moment has a couple gazing at the neighbor's Enclave, wondering what it is.

The new spot is also the first tier-1 ad in three years that shows the full Buick lineup, per Sandra Moore, recently appointed Buick marketing director, who was promoted from advertising director for Buick and GMC. "This is really a way to address people who don't know us," she says, adding that following the initial ad new spots will keep the theme going but with a focus on individual Buick models. "You will see that same story line in those ads as well as on the web and at dealerships."

She tells Marketing Daily that while the campaign's creative message takes a new approach, it's not a huge difference thematically from the idea of "friendly luxury" that the automaker has elaborated with ads like last year’s humorous campaign for the Encore in which old luxury is depicted as literal dinosaurs on the roadway that Encore has to avoid. "It's really an evolution of the message.”

She says that the timing works out because Buick is the official vehicle of the NCAA, and March Madness is, therefore, one of the biggest media events — and buys — for the company. Besides ad rotation on Turner and CBS, "you will see us in game broadcasts and onsite," she says, adding that Buick will be especially active around the Championship game at AT&T Stadium in Arlington, Texas, where it will have an exhibit area displaying the full product lineup within Capital One's Bracket Town. She adds that the brand is executing at NCAA .com, which is streaming the games live.

The automaker is also using its NCAA relationship to support the 2014 Regal via the NCAA’s “Surprising Performances Everywhere” initiative. Heading into the Final Four and NCAA Division I Championship Game, Buick will sponsor an in-studio breakdown and highlight of that day’s most “Surprising Performances” during the “Inside March Madness presented by Buick” post-game show on TBS and truTV.