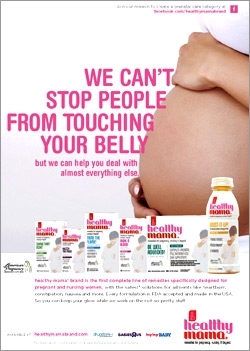 In May, Healthy Mama, a new line of over-the-counter remedies specifically designed for pregnant and nursing women, is teaming with the blog Mommy Shorts for the "We Can't Stop People from Touching Your Belly" brand campaign to raise brand awareness by creating buzz around the product launch.

This campaign is developed by an executive with experience as both a mommy blogger and award-winning ad agency vet. Ilana Wiles is the former SVP Creative Director at FCB (formerly Draftfcb) who then turned full-time parenting blogger by launching the humor blog Mommy Shorts and online series Mommy Show.

Indeed, the Healthy Mama campaign marks the first time Wiles has combined her talents as a traditional ad creative with her blog platform, acting as both the agency and the channel, using the ads she created as blog content.

The campaign is designed to reach expectant moms through humor. Indeed, Healthy Mama products — with names that include Tame The Flame, Move It Along, And Shake That Ache — tackle common pregnancy symptoms like acid reflux, exhaustion, pain relief, sleep aids, nausea and constipation.

"The Healthy Mama campaign aims to open up an honest dialogue about what women go through while they are expecting, giving moms-to-be a reason to laugh at their circumstances together, while raising awareness for a new line of remedies that solve a lot of the physical symptoms," says Wiles.

Reader interaction is a key feature. Mommy Shorts will publish topics and then ask readers to submit additional headlines. To make sure the campaign engages her audience, Wiles created an easy headline template her readers could use to ideate their own headlines. As such, readers and Wiles have already created over 2,350 headlines.

Wiles wrote a follow-up post that contained 30 of the funniest entries (each line used in a mock-up of a Healthy Mama ad), which got shared on Facebook more 18,400 times with over 4,000 Facebook "likes" in just three days.

Ads debut this May in print editions of Fit Pregnancy and Parent & Child.

Still, when Healthy Mama approached Wiles the assignment was to do a traditional advertising campaign for three print ads and three banner ads. Wiles built the blogging initiative into her proposal because she wanted to prove the reach of her channel and the wit of her readers, who are Healthy Mama's target audience. The blog also gave Wiles a place to show the breadth of the campaign without using traditional media dollars, she says, making it much less risky for the client to run edgier lines.