Nissan Back To Amazon, Sans Boxes 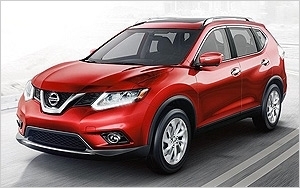 A Nissan in a box? Not this time. In January the automaker ran a program with Amazon.com involving its Versa compact car. Under the "Getting More of what You Love" campaign for the vehicle, the program let consumers go to an Amazon and Nissan-branded microsite at Amazon.com to configure and buy one of the Versas. The automaker got huge media attention --including tweets from the likes of Jerry Seinfeld -- when it delivered three of the cars to new owners in giant Amazon.com cardboard delivery boxes bearing both the Amazon and Nissan logos.

The automaker is doing it again with a plan running through April to support the 2015 Rogue crossover. No boxes this time, though. That’s been done. Also, the Rogue is a considerably larger vehicle. Says Jon Brancheau, VP marketing at Nissan North America: "We will finish with a big bang again, as we did with Versa, but it will be totally different."

He explains to Marketing Daily that from Nissan's perspective Amazon is a huge media property that hasn't been tapped very effectively by players in the auto category. "We saw it as a great way to get in the path of the consumer. It gives a lot of people who wouldn't have otherwise seen the product a chance to learn about it.  And we are continuing to develop ideas with Amazon because of their reach and brand." He says the Versa campaign got 60 million media impressions in 35 countries on five continents.

The Rogue effort puts co-branded ads on Amazon.com that lead to a co-branded shopping page. "Once [shoppers] inquire about our cars or choose to build a model we get that traffic and take it to local dealer. As part of this we have specialists who are highly trained to do that 'warm' hand-off.'" As part of the campaign Nissan is offering $1,000 to anyone who buys or leases a Rogue through the duration of the campaign.

The automaker launched the second-generation 2014 Rogue during the Super Bowl this year with an ad where Rogue goes to extreme lengths to make it to its destination while avoiding traffic, even driving along the top of a commuter train at one point. The challenge is to keep it elevated in the minds of shoppers. Part of that involves doing a media-buy mosaic of national and local spots. The automaker just released a tier II (regional or dealer group) spot for the car, per Brancheau, and will be back in May with another raft of ads. Creative and strategy is handled by long-time AOR Santa Monica-based TBWA\Chiat\Day.

He says the key is flexibility at tier II and strategic discipline in national advertising -- and that the company draws up its national ad plan early and sticks to it. "We laid out the plan last year. We chose which vehicles to focus on and throughout the fiscal year didn't change it once.” Brancheau says flexibility comes at tier II based on inventory and market needs. “We are prescriptive: at the end of the day if a regional VP thinks he needs to, we can support them."

Among other things Nissan is focusing creative on its zero-gravity seats, developed with NASA and launched (so to speak) in the 2013 model-year Altima. Nissan has since put the seats in other vehicles, an effort in part to address that fact that about 80% of Americans have back problems and regard their car seats as devices from the Spanish Inquisition.