In the first update so far this year from a major agency holding company, Dentsu Aegis' Carat unit has upgraded its outlook for the global ad economy, boosting its growth estimate for 2014 by three-tenths of a point to 4.8%.

That's an upward revision from the 4.5% rate of global ad spending growth for 2014 that Carat predicted in its last forecast, issued in September 2013.

Carat said the revision is based on data received to date from 59 markets across the Americas, Asia-Pacific and EMEA, and noted that it represents a marked improvement from 2013, when the agency estimated the global ad marketplace expanded only 3.3%.

Carat currently predicts the global ad economy will expand 5.0% in 2015.

“From a regional perspective, an increase in advertising expenditure is forecast across all regions -- including Western Europe, which has suffered two years of negative decline,” the agency notes in the update released early this morning, adding that its internal data “highlights that the era of double-digit decline in some parts of Western Europe may now be over, with markets including Italy, declining by -10.3% in 2013, transforming into a positive growth market by 2015.”

In terms of specific media, Carat not surprisingly sees a continued expansion in “digital” spending, with that catch-all category growing at a rate of 15.5% in 2014 and “outperforming all other media,” making it the only medium to expand its share of advertising budgets in Carat's 2014 and 2015 predictions.

The report notes that digital already is the dominant media type in key Western European markets, including the U.K., Denmark, Netherlands, Norway and Sweden.

“The real story of the advertising market is the dynamics in digital media,” stated Jerry Buhlmann, CEO of Dentsu Aegis Network, adding: “Digital growth accounts for three times total growth and the seismic trends within digital are causing a convergent media revolution.  Social, mobile and video will all grow by at least 50% in 2014 through developments in powerful technology, access to information and increasing consumer trust.  Whilst the prolific sporting events including the Winter Olympics in Sochi and the World Cup in Brazil will continue to drive TV advertising spend in 2014, the gold medal winners will ultimately be the digital world.” 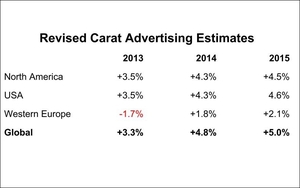