G2 Crowd, an enterprise software review site, has released a ranking of 15 marketing automation systems based on over 800 user reviews.

To be clear, this list is different than the VentureBeat report from one month ago that ranked the best marketing automation vendors for small and mid-sized businesses.

However, like the VentureBeat report, Hubspot tops G2’s list as well, scoring an impressive 95 out of 100 in customer satisfaction.

It’s not all about company size, either. Silverpop, which checked in with just a 26 on the customer satisfaction scale, has more than twice as many employees (583) than the #2 vendor on the list, Act-on (261).

The #6 vendor as ranked by customer satisfaction was Ontraport, a Santa Barbara-based company that has only 60 employees.

Two separate studies with a combined respondent field of fewer than 2,000 do not represent the entire ad industry, but the fact that Hubspot, Salesforce and Marketo rank in the top four in both studies will surely help them bolster claims as the best. 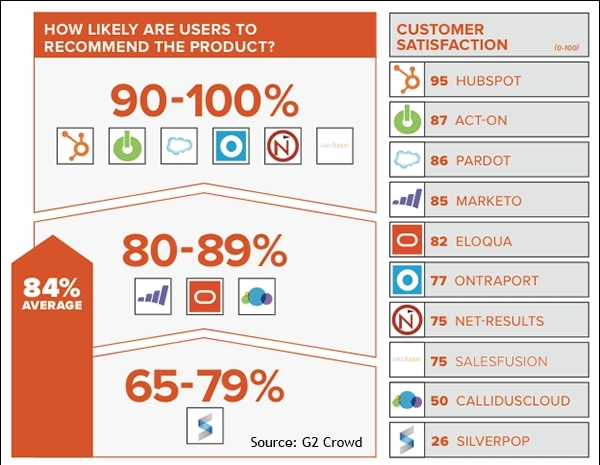