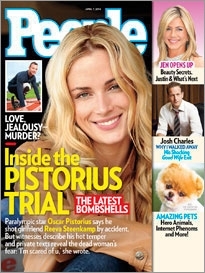 As part of the partnership, advertisers will be able to associate their brands with content from WhoSay’s celebrity members, as well as People’s editorial content.

Liz White, People digital’s vice president and general manager, stated: “We are excited that People is the first mass media brand to open its platform for celebrities to self-publish. We believe that the integration of personal photos, videos and experiences from celebrities using WhoSay creates an enhanced experience for the People audience.”

Southern Living has launched a new home product line, the Southern Living Collection, at Dillard’s stores nationwide. The new collection is the result of a collaboration between Southern Living and Dillard’s, and includes products in categories including bath, bedding and tabletop, as well as decorative accessories like scented candles and ceramics. The collection has a rustic, casual, layered look dominated by neutral colors. The products are available at 225 Dillard’s locations around the country.

Sesame Workshop is launching a new digital publication for families, Sesame Street S’More. The digital publication is the first Sesame Street interactive digital magazine for iPad. The magazine will present themed issues that will help preschoolers learn letters and numbers, develop their creativity, and build listening skills with fun activities hosted by characters like Elmo, Big Bird and Grover. The publication emphasizes read-aloud narration, as well as educational games, puzzles, stories, and videos, with children earning badges for each activity they complete. A section for parents provides tips for more learning opportunities outside the app. Sesame Street S’More is published bimonthly and available for $3.99 per issue or by subscription at $2.99 monthly. An annual subscription of six issues is available for $15.99 for a limited time.

Janell Pittman, the general manager of BHG.com, has been promoted to vice president and general manager for the Better Homes and Gardens and Parents Digital Network, effective immediately, publisher Meredith Corp. announced this week. In this new role, she will add management of Parents.com and Parenting.com to her existing responsibilities as GM of BHG.com. In addition to overseeing strong audience growth at BHG.com, Pittman led the team that launched Must Have Recipes from Better Homes and Gardens, which has been downloaded over 4 million times since December 2011.

James Bennet and Bob Cohn have been named co-presidents of The Atlantic. Bennet will retain his title as editor-in-chief, while adding responsibility for product and technology operations. Cohn will transition from his current role of digital editor to oversee all business operations, including sales and marketing, circulation, AtlanticLIVE and The Wire, as COO and co-president. Atlantic Media also announced that Kevin Delaney and Jay Lauf have been named co-presidents of Quartz; they will also retain their previous responsibilities as editor-in-chief and publisher of Quartz, respectively.

Patricia Fox has been promoted to the position of executive vice president of operations at Active Interest Media. She previously served as senior vice president and general manager at AIM’s Healthy Living Group. In her new position, Fox will lead AIM’s consumer marketing and audience development, manufacturing and production, newsstand marketing and distribution, international licensing, public relations, and research. AIM also announced the appointment of Kim Paulsen to replace Fox as VP and GM of the Healthy Living Group, and Jason Brown to the role of vice president of digital content.
celebrity, magazines, social media, web sites
Next story loading