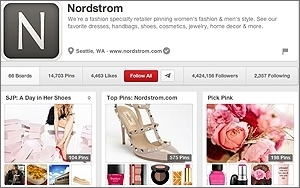 That news comes from Experian Marketing Services’ 2014 Digital Marketer study, and finds that Amazon (which is the top recipient of traffic from all social sites), Target, Zulily, Walmart and Nordstrom are the most popular Pinterest retail brands. As of this month, social media sites now account for 7.72% of all traffic to retail Web sites, an increase from last year’s 6.59%.

Search, of course, still dominates how consumers land on any given store's site. “But social media is becoming a significant source of traffic across the Internet, as consumers increasingly use sites like Facebook, Pinterest or YouTube more as discovery platforms,” writes Bill Tancer, general manager of global research, in its report. “Many of today’s marketers are leveraging the power of social communities to increase customer engagement and expand their brand’s reach. For retailers, all eyes are on Pinterest.”

The survey, now in its 6th year, also finds that 96% of retailers now use email campaigns to steer shoppers toward social channels; Pinterest is being promoted by 64% of those brands.

Amazon is tops in all three social channels. But Walmart takes second place in terms of Facebook-driven traffic, followed by Zulily, Target and Beyond the Rack.

For YouTube, Walmart is again No. 2, followed by GameStop, Crutchfield and Target.

The study also looks at the way social media drives traffic to other social sites, with upstream traffic from social networking sites climbing 20%, and search -- while still responsible for the greatest share of traffic at 39.1% -- seeing its share fall 13%.

It also finds that while the vast majority (93%) of retail execs say Big Data is critical, they don't trust it, and believe as much as 22% is wrong, an increase of 5% from last year.

And while retailers know they need to step up their cross-channel game to survive the challenges ahead, most are stymied by how to make it happen. For example, 74% of marketers report that their departments are still organized by channel, creating marketing short-sightedness that is difficult to overcome.

“Marketers have long argued that the most valuable asset any organization has is its customer base,” the report says. “However, most C-suite executives are unable to define the value of their customers or understand the true return on investment of their cross-channel marketing initiatives.” And its “channel myopia … hinders the ability to recognize customers across channels, often resulting in poor messaging and ad content that can damage the customer experience.”