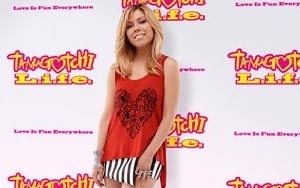 "The more we looked at Jennette, the more we recognized she has all those qualities and a personal passion for the property. In fact, during our first photo session, she loved the fashions, picking out favorite outfits and accessories. They really resonated with her fashion style."

McCurdy, best known for her role as Sam Puckett on the Nickelodeon shows iCarly and Sam & Cat, will become the face of Tamagotchi L.i.f.e., representing the property and participating in a marketing campaign that only targets the U.S. and Canada "right now," says Ueno.

The first component of the marketing campaign is rolling out now with the “Win a Spa Day with Jennette McCurdy in Hollywood!” sweepstakes. Fans enter during the current four-week period to win an all-expenses-paid trip for two people to come to Southern California and enjoy a "relaxing spa experience with Jennette," says Ueno. Additional events are planned throughout her first year in this new role, including a live appearance with fans at an upcoming consumer event.

At the same time, McCurdy will play an active role in promoting Tamagotchi L.i.f.e. through her own social media fan base.

McCurdy's fan base aligns with this collection's target demographic. This lifestyle brand originally launched with a website and fan pages in early November 2012, and then this fall, partnered with licensing agencies Evy of California, Inc. and Mighty Fine for juniors branded apparel. Still, in order to raise the brand's awareness particularly among tween and teen girls, Sync Beatz Entertainment, serving as both the master licensing agency for Tamagotchi L.i.f.e. and on behalf of client, Bandai Co., Ltd., initiated the outreach to Jennette’s team - specifically her talent agency UTA - for a one-year agreement with a mutual option to extend.

The alliance coincides with the iOS release of the new freemium app titled Tamagotchi L.i.f.e. Tap and Hatch. (The game is already available for Android devices.) The Tap and Hatch version, developed by Tokyo-based Namco Bandai Games, features 110 Tamagotchi characters - introduced throughout the toy's 17-year history - to create a unique puzzle adventure.The app contains more than 100 levels and incorporates a social media tool which enables users to engage friends in cooperative play.