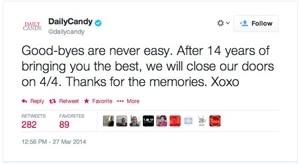 “DailyCandy and Television Without Pity were groundbreaking businesses when they launched more than a decade ago,” NBCU said in a statement. Today, however, they “are no longer viable businesses for our company.”

Unlike iVillage, which NBCU said would live on as part of Today.com, DailyCandy and Television Without Pity will cease any and all operations on April 4.

A company spokeswoman declined to elaborate on the rationale behind the move -- first reported by Re/Code -- but mediocre traffic numbers likely factored into the equation.

This February, Television Without Pity’s domestic audience was down to 100,000 unique visitors from 173,000 in February 2013, according comScore. Year-over-year, DailyCandy’s monthly audience was actually up from 467,000 to 613,000 -- but apparently not enough for NBCU executives. (At its peak, DailyCandy’s newsletter also reached millions of inboxes, but comScore does not track those figures.)

The shutdowns are expected to affect nearly 70 employees, but NBCU declined to address their fates on Friday.

For analysts, DailyCandy’s downfall represents the end of an era for Web publishers — and a clear warning for those that fail to continually innovate.

“It was fun … it was different, and for a while everyone talked about it,” Susan Bidel, a senior analyst at Forrester, said Friday. “But the audience moved on, new products launched to meet that market, and DailyCandy suffered the consequences.”

“In our fast-moving digital publishing environment, a product either continuously evolves and hopes that evolution reflects changing consumer expectations or dies,” added Bidel.

DailyCandy’s demise was not for lack of trying. Along with a steady flow of brand partnerships, and product initiatives, NBCU brought in Alison Moore to breathe new life into the property in late 2012. Formerly senior vice president of digital products at HBO, Moore was expected to reinvent DailyCandy across all digital channels as its executive vice president and general manager.

DailyCandy’s fate also raises questions about the value of publishers’ social media presence. Currently, the property has about 950,000 followers on Twitter, roughly 64,000 Pinterest followers, north of 390,000 friends on Facebook, and nearly 13,000 fans on Instagram.