Spider-Man Meets His Baby Me In Latest Evian Video 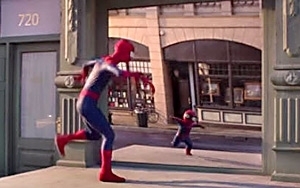 Evian's latest baby-themed video in its ongoing "Live Young" campaign ups the viral ante by featuring Spider-Man and his own baby version – in time to promote Sony Pictures' upcoming release of "The Amazing Spider-Man 2."

The 1:19 video is a sequel to 2013's "Baby & Me," in which ordinary folks danced with baby images of themselves viewed in a mirror on a city street.

Spidey is initially taken aback by encountering his baby version, but the two are soon spinning webs, jump-roping and dancing together.

"Baby & Me 2" employs the same, danceable theme song as its predecessor: a remix of "Here Comes the Hotstepper" by Yuksek.

Evian primed the social pump for this current entry in the now much-anticipated series of video ads, from BETC Paris, by posting a 23-second trailer for it on YouTube on March 24, and promoting that via social media and media outreach.

After about 48 hours on YouTube, views for the full video were at 875,000 and counting as of this posting.

Nilsson also acknowledged the pressure involved in trying to one-up the viral success of each prior video in the series, which started with "Roller Babies" in July 2009.  "I think in a way always when you've been working on something great, success becomes a little bit your enemy," he said. "Every time you strive to do better than before, you want to have more attention, get more views on the Internet."

The first "Baby & Me" has drawn roughly 140 million views, when all platforms are counted, since its debut in mid-April last year (including 75 million-plus on YouTube). "Roller Babies" is currently showing 74 million YouTube views for its international version, and 19.4 million and 6.6 million, respectively, for its U.S. and French versions.