What's Not To Like In Heineken's 'The Legendary Posters?' 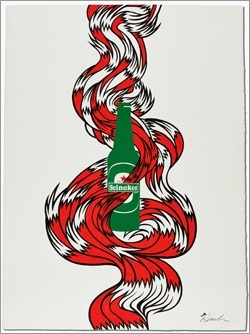 In the oddest affliction that has struck me in some time, I have been rendered mute. My garbley baritone went AWOL on Monday and I’ve been without a voice since then (literally, not metaphorically; I can still cyber-agitate and/or pamphleteer if the urge hits me). Given that I’m otherwise asymptomatic, it’s tempting to write it off as an immune-system hiccup - Larryngitis, if you will. Either way, the angels are sad, for they cannot hear me sing.

Happily, I have retained control over most of my other faculties, which has allowed me to sample some of the brand bounty touted in today’s exercise. And wouldn’t you know it, it’s beer week! Ah, let those barleyed hops course past my parched lips and over my tongue and OH GOD IT TASTES LIKE TITANIUM SLURRY QUICK GET ME SOME ANCHOVY NECTAR TO WASH IT DOWN OH LORD HELP ME THE ACID IS REFLUXING.

Apparently I’ve just answered a question nobody asked: Is it possible to be swayed by a food/beverage campaign if the product it promotes has long made you want to cauterize your taste buds? I guess so, because Heineken’s dippily named but otherwise clever and quirky “The Legendary Posters” prompted me to crack open my first Heineken since the unfortunate incident with the t-shirt cannon and the mall cop.

On paper, the campaign concept comes across as puzzling. Quoth the press release: “Far more than just pieces of paper, each poster began the same but then undertook a legendary journey to come back with its own story to tell. Each bearing the physical marks of its epic adventure, or the creative signature of the collaborator who customized it.”

Translated for English speakers: Heineken handed out 40 posters featuring its bottle/logo - far less an iconic image than, say, the Coca-Cola swirly-scripty dealie or Count Chocula’s tusks of sugary menace - and assigned a host of artists and entertainers to adorn, fancify and otherwise deface them. It’s all for charity, of course: the posters will be auctioned off on April 13, with all profits going to Reporters Without Borders - an organization whose intrepid support of press freedoms makes it a whole lot easier for me to sit on my ass in Jer-Z and write stuff about things.

Given that basic description, one might wonder where video fits in the mix. Turns out that somebody had the good sense to train a camera on the personalities as they went about their poster-deconstructing business. As a result, the “Legendary Posters” videos are less a simple brand-exhibition exercise and more a window into the creative process. Hell, even Jimmy Connors flashes heretofore unseen depth of feeling, trash-talking a poster affixed to a cement wall before assaulting it with flaming forehands.

Better still, a few of the “Legendary Posters” clips double as sly plays on genre conventions. “The One That Spent a Night With a French Actress,” for example, gently satirizes the just-begging-for-it genre of short foreign films. The subtitles, the backlit shot of the actress staring forlornly out a window, the overly guttural sounding of “fin!” at the clip’s conclusion - it’s all there, neatly condensed for the short-attention-span era. Give actress Audrey Vernon credit for the finest piece of acting with an inanimate object since Sandy first locked eyes with Keanu in Speed (zing!).

It’s all about the attitude, really. Everything in “The Legendary Posters” comes from a place of warmth; there’s not an iota of irony, skepticism, meanness or preciousness in its bones. By resisting the urge to default to one of the usual brand-video ‘tudes - effortful silliness, post-hipster remove, etc. - “The Legendary Posters” distinguishes itself with decency. Good execution, good cause. What’s there not to like?