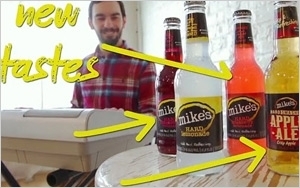 Amid new-product and other 15th-anniversary announcements, Mike's Hard Lemonade Co. has announced that's is dropping its traditionally TV-dominated marketing strategy in favor of one that's 100% digital.

Sanjiv Gajiwala, Mike's director of marketing activation, says the decision was made after two years of testing and evaluating all of the channels and media that the brand has been employing.

Given digital's effectiveness in enabling Mike's to precisely target and engage subsets of its consumer base as it continues to expand its flavored malt beverage (FMB) varieties and formats, the company will actually significantly increase both its engagement frequency and investment in paid media this year under the all-digital strategy, he confirms.

He cites Mike's Harder, a higher-alcohol line (8% alcohol by volume) as one example. The company is expanding retail distribution for Harder, which had been available primarily in convenience stores since its launch in 2009 — to liquor stores, bars and restaurants, and launching 12-packs of 8-ounce cans.

Harder will get its first line-specific marketing campaign this year to support the expansion. With a core customer base that's a bit younger than that of the regular Mike's line (21 to 27, versus 27 to 35) and skews a bit more male and multicultural, Harder is partnering with The Onion on an online branded content section, he says. The Onion will also produce Harder-sponsored content for YouTube and other channels.

The Harder campaign's streamed content for mobile and desktop will be targeted by variables including location, daypart and weather, Gajiwala reports. In addition, several of its distributors have their own marketing budgets and social media staff, and Mike's will work with them to create locally tailored social content.

The company's overall marketing strategy will include paid ad buys on a variety of targeted online channels.

It is also moving to working with individual agencies on a by-campaign or by-project basis, having ended its agency-of-record relationship with Grey Advertising/New York last year.

This year's first effort, with Chicago-based TRIS3CT, is a video that celebrates "15 years of flavor and fun," with an emphasis on the brand's wide variety of flavors and its unconventional personality.

Other new offerings include a new spring seasonal flavor, Mike's Hard Peach Lemonade, and a new, Mango Lemonade flavor of its frozen pouches (which were launched summer). The company has also reformulated Mike's Lite Hard Lemonade, adding a touch of honey for "exceptionally natural taste."

At the same time, it has updated its logo. The logo still incorporates a lemon shape but now emphasizes the Mike's name  reflecting — says the company, it's fans' "first-name" relationship with the brand (the Mike's emphasis also clearly supports the continuing expansion of its offerings well beyond its original lemonade). In addition, its bottles have a new, longer-neck profile.

In its first year, 1999, Mike's made a major splash by selling two million cases in the U.S. Last year, it sold 190 million cases, according to the company.