Letterman's Announcement Kicks Off Another Round Of Late-Night Musical Chairs 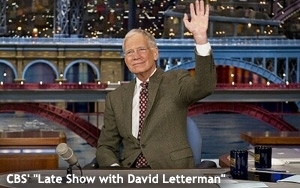 Jimmy Fallon had not even been at the helm of NBC’s “The Tonight Show” for two months and already we immersed in another round of Late Night Musical Chairs.

Seconds after CBS made the announcement last Thursday that David Letterman will be retiring in 2015, reporters and critics who cover television were madly tweeting their thoughts about who should replace him and why. (Many of them were doing so from their seats at the Discovery Communications' upfront presentation at Jazz at Lincoln Center, which was taking place when the big news broke.)

While the press immediately got to buzzing about which funny middle-aged white man should replace him (Conan! Craig! Jon! Stephen! Jay! Jay?) I found myself musing about things CBS might do to mix up a daypart that is currently suffering from a uniform sameness that is rendering it less than the sum of its lookalike parts. I was also wondering whether Letterman was really going to retire or if he was simply leaving CBS’ “Late Show” and would be looking into other things. (Hey, is it possible that Jay or Dave might end up with a show of another kind on one of the burgeoning Discovery networks? Their mutual pal Oprah is having the time of her life over there, or so it appeared at the Discovery presentation.)

It’s a sad commentary on the state of the business to observe that the selection of a woman, a person of color or a gay individual to replace Letterman in so high-profile a position would be one of the biggest television stories of the millennium -- or ever. While it would be terrific for CBS to show its competitors how it’s done by making such a change, it isn’t fair to put the burden of choice squarely on the network, as it is predicated on the availability and interest of a limited number of individuals who could personify a shift of that kind. Their names (Ellen, Tina, Andy, Neil) are already being bandied about with much reactionary gusto and little serious thought.

The name that seemed to be the most active late last week was Chelsea Handler, the long-time host of a niche post-prime talk and comedy program on E! It has been reported that CBS is seriously considering her as Letterman’s replacement. I certainly don’t want to discourage CBS (or any broadcaster) from making bold and risky choices, but at first blush Handler would seem a little too narrow a choice. That is to say, I’m not sure she’s as popular outside of Hollywood as she is within. Of course, if she were to be paired with someone else …

As long as we’re all speculating, how about if CBS went with a comedy-variety late night show with two or more stars at its helm? (Look at the success CBS is having in daytime with “The Talk” and ABC with “The View.”) In some ways the legendary Johnny Carson understood that two personalities were better than one; he was almost never without sidekick Ed McMahon, who functioned as an on-the-couch co-host much of the time. When Amy Poehler joined Seth Meyers on the first night of NBC’s “Late Night with Seth Meyers” I couldn’t help but think how great it would be if the two of them were permanently hosting the show together. (Again, look at daytime and the dynamic duos of ABC’s “Live”: Regis and Kathie Lee, Regis and Kelly, Kelly and Michael … not to mention Kathie Lee and Hoda on the fourth hour of “Today.”)

Even if a permanent co-host team of sufficient appeal couldn’t be put together for “Late Show,” how about one permanent host and a different co-host every week? The program would always be fresh!

What if CBS were to move all or part of the show out of The Ed Sullivan Theater and into a Times Square location -- and then tape the show at dusk or after dark and provide as its backdrop a window onto a location that millions of people consider to be the most exciting in the world? Just look at how windows onto the streets of New York have energized NBC’s “Today” and ABC’s “Good Morning America” during the last 20 years. “Today” many years prior had featured a window onto the street, but that feature had disappeared for decades before NBC built a new “Today” studio amid much fanfare in the early Nineties.

The odds of such things happening are slim to none. Of even smaller odds are options that CBS and ABC went with back in the Seventies when each realized at different times that it simply could not compete with “The Tonight Show Starring Johnny Carson,” at the time the mightiest program on television. CBS went with a nightly late-night movie series that offered a rich mix of classics and contemporary films along with little-seen horror and independent features. (As it happened, those movies proved more successful than the talk shows and cheapo drama series the network later tried opposite Carson until Letterman came along.) ABC famously countered the fun and games that Carson was offering every night with a thought-provoking talk show for smart audiences hosted by Dick Cavett.

There really should be room on the broadcast networks today for a show featuring extended conversations with intelligent people from all media. (Letterman and Leno both did quite well throughout their late-night tenures talking with presidents and other politicians, proving there is an audience in late night for conversations of substance.) A show of that kind need not be as old and dusty as it sounds.

broadcast networks, tv
3 comments about "Letterman's Announcement Kicks Off Another Round Of Late-Night Musical Chairs ".
Check to receive email when comments are posted.
Read more comments >
Next story loading