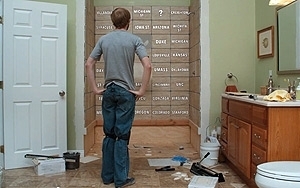 With every college basketball fan in the country still licking their wounds over battered brackets, Lowe’s seized a social media moment, creating a Twitter-inspired spot for the tournament’s biggest games.

When March Madness kicked off a few weeks ago, Lowe’s debuted a new campaign aimed at hapless young DIYers, themed “You can always come to Lowe’s for help.” It featured DIY efforts gone bad, with slack-jawed young men watching helplessly as outdoor swings collapse, ceiling fans fall, and poorly grouted tiles slide off bathroom walls. Some of those same young men, dumbfounded as their brackets imploded, invoked Lowe’s in their tweets.

“Wow. ACC crumbling like those bathroom tiles in that @Lowes commercial. #MarchSadness,” tweeted one. “UCLA's hopes and dreams fell like the tiles in that Lowe's commercial,” moaned another.

That inspired Lowe’s and BBDO, its ad agency, to create a special version of the ads to air during final games of the tournament, including the championship.

“March Madness is one of the most significant live sporting events each year that captures the attention of a broad, national audience,” says Brad Walters, Lowe’s director of social media. “The inherent excitement of tournament rivalries, upset games, and unpredictable, unforgettable moments is reflected in the tremendous volume of conversation about the tournament that takes place on social media,” he tells Marketing Daily in an email. “This conversation presents rich opportunities for creative and nimble marketing for brands that are listening and able to respond quickly.”

The new ad includes a name of each eliminated college on a tile, crashing to the floor. “The insight and revised creative changes have been occurring in very short increments of time to capitalize on the conversations and excitement of the tournament,” he says.

Walters cites Nielsen research that has found sports events drive close to 50% of Twitter conversations in a given month. “They can express that passion in real time. So it’s a natural fit for us to listen to what people are saying and react in a way that is authentic to our brand, as well as our customer’s use of social media."

He says the Mooresville, N.C.-based retailer will track engagement metrics with Lowe’s Twitter platform, along with the tone of conversation, to assess reaction.

So far, the tournament has been delivering record viewership. Nielsen reports that Turner Sports and CBS Sports’ exclusive presentation of the 2014 NCAA Division I Men’s Basketball National Semifinals were the most-viewed college basketball game of all time on a cable television network.