For Havas WW Chicago Interns Navigating Instagram Is A Must 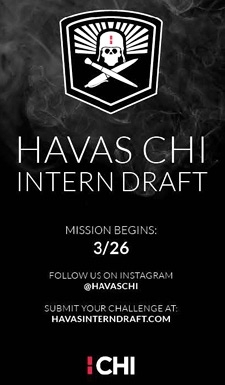 Advertisers are intently focused on maximizing their social presence which is why Havas Worldwide Chicago wants native social media experts for their summer internship program.

Indeed, the office is hiring all of its summer interns via Instagram with their "Havas Chi Intern Draft."

"It's based on the simple idea that kids understand these platforms," says Jason Peterson, President, Havas Chicago. "If you want to hire someone to do social media, hire the people who know how to do it best."

Last year, Havas Chicago launched its first social media outreach by seeking interns via Twitter. That initiative eventually resulted in employment for eight of the 15 interns.

The concept's tagline "I am here to take your job" seeks applicants with suggestions on what Havas Chicago can do better and what they are doing wrong. Applicants must directly challenge one of twelve key Havas Chicago executives who are showcased in this campaign. Each executive lists his or her strengths and weakness, all in a humorous manner. Peterson, for instance, lists his weakness at crying at the movies “Rudy” and “Hoosiers.”

The search is divided into three rounds. The initial round closed April 4 with 135 applicants. "One kid had 40 posts which showed ambition," says Peterson. "A couple definitely failed because you could see they set up new accounts just to enter."

The Chicago-based app Popular Pays, which allows users to trade their social media influence for goods and services, was responsible for three applicants. "We had a post that you would get an Havas [Chicago] internship in exchange for 50,000 Instagram followers," says Peterson. Two girls, with 100,000 and 200,000 followers respectively, submitted applications, as well as one boy with 600,000 followers.

There are a few early favorites, says Peterson. "I like it when social media becomes physical because it shows they understand the channel." To that end, on Friday, three applicants joined forces to throw a "good bye party" in Havas Chicago building's lobby to celebrate that these girls will soon take over their jobs.

Next, shortlist candidates will be notified by April 14 with final offers sent via direct message on April 18. Interns will work in Havas Chicago from June 9 to August 15. The full social media campaign reaches across Twitter, Facebook, LinkedIn and Havas Chicago homepage.

Although this campaign is only for interns, it undermines the importance of social media within the agency. All staffers are required to spend 20% of their time managing their personal social media pages. "To me, it's necessary business to be active in all channels," says Peterson. Havas Chicago has hired executives via social media channels, and one focus of this year's intern campaign is to jump-start the agency's Instagram following.

"This is going to be an ongoing feed with regular conversations," says Peterson.
While it's too soon to predict how the agency will recruit next year's interns, Peterson says one emerging social media channel catching his interest is Secret.