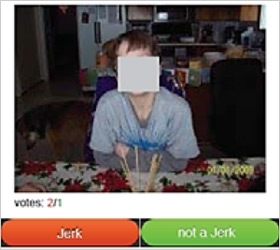 The Federal Trade Commission has filed a complaint against the social site Jerk, which allegedly scraped photos and other data from the profiles of more than 70 million Facebook users, and then publicly branded some of those people as “jerks.”

The FTC says the site duped people into believing they could delete negative information about themselves by purchasing a $30 membership to Jerk. In fact, according to the FTC, “consumers who paid for a standard membership received nothing from respondents in exchange for their payment of the membership fee.”

The agency adds that many Jerk profiles appeared in search engine results when consumers searched for people by name. “Numerous consumers, including parents and job searchers, discovered Jerk profiles of themselves or family members,” the FTC alleges. Some of the profiles also displayed disparaging comments from other users, like “Nobody in their right mind would love you . . . not even your parents love [you],” according to the FTC.

Jerk allegedly populated its site with data scraped from Facebook in 2010 -- often in violation of its policies, according to the FTC complaint. For example, Jerk allegedly failed to obtain people's consent to collect photographs and other data, failed to delete data after Facebook disabled Jerk's access to the service, and failed to delete consumers' data upon their request.

The FTC adds that numerous consumers said that information they marked as “private” on Facebook surfaced on Jerk.

Jerk appears to have stopped operating last year, shortly after receiving a subpoena from the FTC. In March of 2013, Jerk unsuccessfully tried to quash the subpoena, arguing that it hadn't done anything improper. “Jerk, LLC has been led to believe that the investigation relates to the display on Jerk of photographs that are publicly available on the Internet,” the company argued in written papers. “Jerk, LLC does not have an understanding of what is claimed to be improper about that display.”