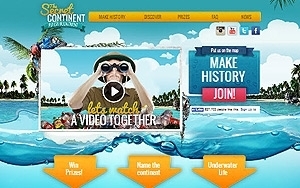 In partnership with nonprofits Earth Day Network and 5 Gyres, SodaStream has launched a cause-related campaign that aims to raise awareness of the "Great Pacific Garbage Patch," a collection of mostly plastic waste that is twice the size of Texas.

The aim is very much in earnest: To encourage consumers around the world to sign a petition (hosted on Change.org) that will be sent to world leaders, "urging them to work to address the issue of plastic pollution in our oceans."

But the tongue-in-cheek — actually, rather satiric — approach, replete with contests, videos and social media sharing tools, owes more to branded entertainment than to traditional cause-related efforts.

Less surprisingly, the creative incorporates numerous digs at soda companies and messaging about SodaStream’s "ongoing mission to help consumers reduce their carbon footprint and prevent continued environmental damage in landfills." (Having a SodaStream machine "can save the average U.S. family up to 2,000 bottles and cans each year," says the company.)

SodaStream has dubbed the Pacific garbage patch "The Secret Continent." The creative premise: This floating mass, large enough to be an eighth continent, is treated like a "resort" destination.

Visitors to the Secret Continent hub site are invited to explore the "funplastic heaven in the heart of the Pacific Ocean." They can scroll through colorful images of the "rare and enchanting fish," including the "Plastic Phish" (water bottle), the "Common Piranha-Cola" (soda bottle), the "Carryfish" (plastic shopping bag) and the "Rubber Snail" (condom). Each creature's lengthy lifespan and origin is noted (the Rubber Snail's origin is listed as "men's wallets").

Another section shows how "this magnificent content was created in part by Big Soda companies and their plastic bottles." There are also video "expeditions" of the continent created by Vice magazine; a video of real sea captain Charles Moore giving a TED presentation about plastic pollution in the seas; and examples of continent "culture," including facetious, garbage-based food, fashion and "celebrities" (animals caught up in the mess).

In case some site visitors miss the irony, there's also a FAQ section explaining that while there is a real, huge blob made up of plastic waste and particles in the Pacific, it's not a solid land mass, and there's no "resort" (and noting SodaStream's advantages over the resources required to recycle plastic bottles).

The contests — offering SodaStream machines as prizes — include coming up with a catchier name for The Secret Continent, and creating a design for its flag. For the latter, entrants can upload their flag images on the site, or post them to Instagram using #secretcontinent.

SodaStream is promoting the campaign via PR and digital and social media ahead of Earth Day on April 22. Banner ads are running on a broad variety of sites, according to the company.

Secret Continent site visitors are encouraged to "like" SodaStream on Facebook (currently showing nearly 630,000 likes) and follow the brand on Twitter (6,600 followers). Those social accounts in turn are promoting The Secret Continent campaign and shareable links to its site and images. The campaign's site also features links to the brand's Instagram and YouTube channels.

Actress Scarlett Johansson, SodaStream's brand ambassador, is helping to promote the Secret Continent campaign, encouraging others to join her in signing the petition.

The Secret Continent campaign "isn't just a publicity stunt"; it's "a serious effort to advocate for the health of our oceans and the survival of our planet," said Kathleen Rogers, president of Earth Day Network, which works with more than 22,000 partners in 192 countries year-round to mobilize the environmental movement, as well as Earth Day events.

The 5 Gyres Institute is dedicated to researching the issue of plastics in the world’s oceans and engaging communities in systemic change.