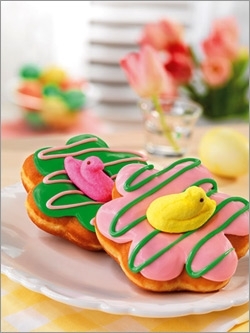 Colder-than-normal weather and a late Easter may have consumers starving for spring, but they say they they're not likely to let it show in seasonal retail sales. A new survey from the National Retail Federation forecasts a decline in spending on Easter, which this year falls on April 20. On average, those who celebrate say they intend to spend about $137.46 on clothes, food, candy, and gifts, down from $145.13 spent last year. And fewer people overall will pay much attention to the holiday: 80.3% have plans to celebrate, down from 83% last year.

Still, the Washington D.C.-based trade group speculates that once shoppers shake off their cabin fever and face aisles full of jellybeans, they will start spending after all. “The winter doldrums left consumers with a lot of pent-up demand, and although many Americans may take a cautious approach to spending on Easter items this year, retailers are anticipating that warmer weather will easily put consumers in the mood to buy bright clothes, holiday decorations and more,” says NRF President and CEO Matthew Shay, in its release.

Food typically represents the biggest slice of a family's Easter budget, whether served at home or in a restaurant, with an average of $43.18 spent on the holiday meal. And chains like Dunkin' Donuts are out to scratch that Easter itch, introducing a Peeps Donut, which even includes a Peepstakes. (Fans post pics of their favorite “peeps” on either Twitter or Instagram to win “VIPeep” prizes.)

Friendly's is again partnering with Easter Seals for a series of cause-related promotions: When families make a $2 donation, their child's meal is served in a Friendly's frisbee.

About 43% in the NRF poll -- which was conducted by Prosper Insights & Analytics and was based on responses from 6,387 adults -- plan to buy new spring clothes, and 89.3% will buy Easter candy. Many families also buy gifts (with total spending expected to hit $2.4 billion, flowers ($1.1 billion) and decorations ($1.1 billion).