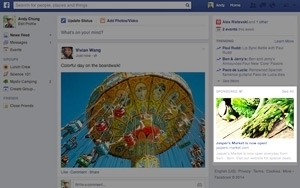 Ever since Facebook opened up the news feed to advertising, display ads on the right side of the page have become also-rans in the competition for marketers’ dollars. Higher engagement rates in the news feed have made it prime real estate for Facebook advertisers, making the right-column ads a less attractive option.

To help change that, Facebook on Wednesday announced a redesign of sidebar ads that makes them more consistent with those in the news feed, with bigger images.

“They will use the same proportions as desktop News Feed ads, they will be larger in size, and there will be fewer of them. For advertisers, this offers a simpler way to create ads and an enhanced creative canvas on the right-hand column of Facebook,” stated a post on the Facebook for Business blog.

A Facebook spokesperson would not specify how many fewer ads would be shown in the sidebar because of the changes. Currently, up to six or seven ads at a time can appear in the right column. Reducing that total to one or two larger ads would naturally increase share of voice for advertisers running there.

In early tests, Facebook said the updated ads have generated three times higher engagement from people seeing the new design. Because the sidebar ads replicate those in the news feed, marketers can now use the same image for both placements.

Some advertisers will be able to use the new ad design later this month, with the full rollout coming later this year. For now, Facebook will support both the old and new right-column formats.

As part of its broader effort to make the social network more consistent across platforms, Facebook last month updated the way the news feed looks on the desktop to match that on mobile devices. The social network had 945 million monthly mobile users at the end of 2013.

Because so much activity now takes place on mobile, Anne-Marie Kline, SVP, social content at DigitasLBi, suggested that updating the right-column ads won’t make much difference. “Facebook is solving the wrong problem,” she said. “If 68% of the traffic to Facebook is on mobile, then they should be giving advertisers richer experiences in feed. People can’t see the right rail on their phone.”

In the fourth quarter of 2013, mobile advertising made up the majority of Facebook ad revenue for the first time -- accounting for 53% of the $2.34 billion in ad sales. The proportion is expected to continue growing this year.