I'm Atlantic City, Do Me 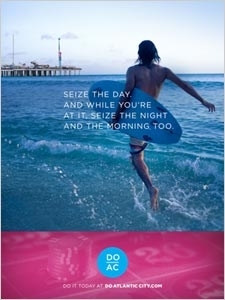 The Atlantic City Alliance has launched at a $20 million tourism campaign to encourage visitors to one the New Jersey shore’s more well-known destinations.

Created by Havas New York, the “Do Anything. Do Everything. Do AC” campaign launches on April 20th and includes TV, radio, print, digital and billboard advertising.

The initiative's intent is to expand the region's image beyond gaming and to attract more leisure tourism, with ad spend specifically targeting likely visitors.

Thus the campaign is casting a wide with online advertising that is national, while traditional advertising is concentrated in Atlantic City’s largest feeder markets—New York, New Jersey, Delaware, Pennsylvania and Maryland.

And radio DJs from New York, Philadelphia, Baltimore, Chicago and Houston will travel to the shore, which will then hopefully spark on-air dialogue and build word-of-mouth with listeners.

In addition, the campaign will have a presence at the Atlantic City Airshow, Challenge Triathlon and the July 4th fireworks.

Meanwhile, a separate $1 million DO AC advertising campaign—funded by the Casino Reinvestment Development Authority and managed by the Atlantic City Alliance —was also introduced in April in Chicago and Houston to promote new, non-stop service on United Airlines to Atlantic City International Airport. To support these routes, the CRDA developed a new mobile-friendly website  that features photos, videos, and the “Who Am I in AC” game that allows users to learn about fun and unique Atlantic City activities.